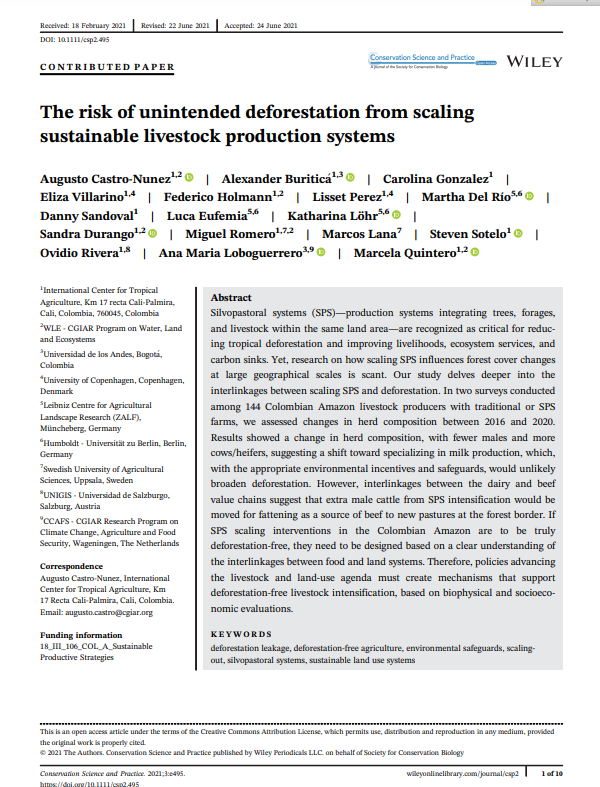 Silvopastoral systems (SPS)—production systems integrating trees, forages, and livestock within the same land area—are recognized as critical for reducing tropical deforestation and improving livelihoods, ecosystem services, and carbon sinks. Yet, research on how scaling SPS influences forest cover changes at large geographical scales is scant. Our study delves deeper into the interlinkages between scaling SPS and deforestation. In two surveys conducted among 144 Colombian Amazon livestock producers with traditional or SPS farms, we assessed changes in herd composition between 2016 and 2020. Results showed a change in herd composition, with fewer males and more cows/heifers, suggesting a shift toward specializing in milk production, which, with the appropriate environmental incentives and safeguards, would unlikely broaden deforestation. However, interlinkages between the dairy and beef value chains suggest that extra male cattle from SPS intensification would be moved for fattening as a source of beef to new pastures at the forest border. If SPS scaling interventions in the Colombian Amazon are to be truly deforestation-free, they need to be designed based on a clear understanding of the interlinkages between food and land systems. Therefore, policies advancing the livestock and land-use agenda must create mechanisms that support deforestation-free livestock intensification, based on biophysical and socioeconomic evaluations.