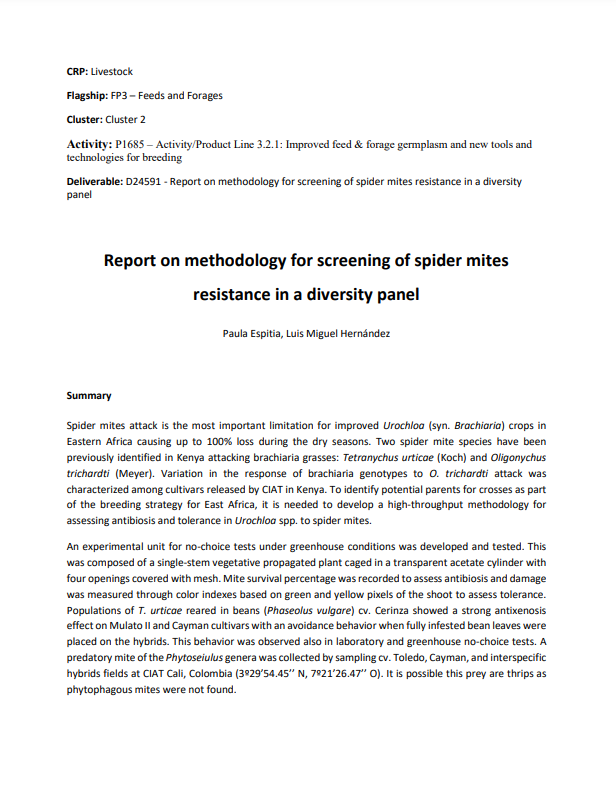 Spider mites attack is the most important limitation for improved Urochloa (syn. Brachiaria) crops in Eastern Africa causing up to 100% loss during the dry seasons. Two spider mite species have been previously identified in Kenya attacking brachiaria grasses: Tetranychus urticae (Koch) and Oligonychus trichardti (Meyer). Variation in the response of brachiaria genotypes to O. trichardti attack was characterized among cultivars released by CIAT in Kenya.

To identify potential parents for crosses as part of the breeding strategy for East Africa, it is needed to develop a high-throughput methodology for assessing antibiosis and tolerance in Urochloa spp. to spider mites.

An experimental unit for no-choice tests under greenhouse conditions was developed and tested. This was composed of a single-stem vegetative propagated plant caged in a transparent acetate cylinder with four openings covered with mesh. Mite survival percentage was recorded to assess antibiosis and damage was measured through color indexes based on green and yellow pixels of the shoot to assess tolerance.

Populations of T. urticae reared in beans (Phaseolus vulgare) cv. Cerinza showed a strong antixenosis effect on Mulato II and Cayman cultivars with an avoidance behavior when fully infested bean leaves were placed on the hybrids. This behavior was observed also in laboratory and greenhouse no-choice tests. A predatory mite of the Phytoseiulus genera was collected by sampling cv. Toledo, Cayman, and interspecific hybrids fields at CIAT Cali, Colombia (3º29’54.45’’ N, 7º21’26.47’’ O). It is possible this prey are thrips as phytophagous mites were not found.