CGIAR: A Vital Knowledge and Science Partner for Climate Action 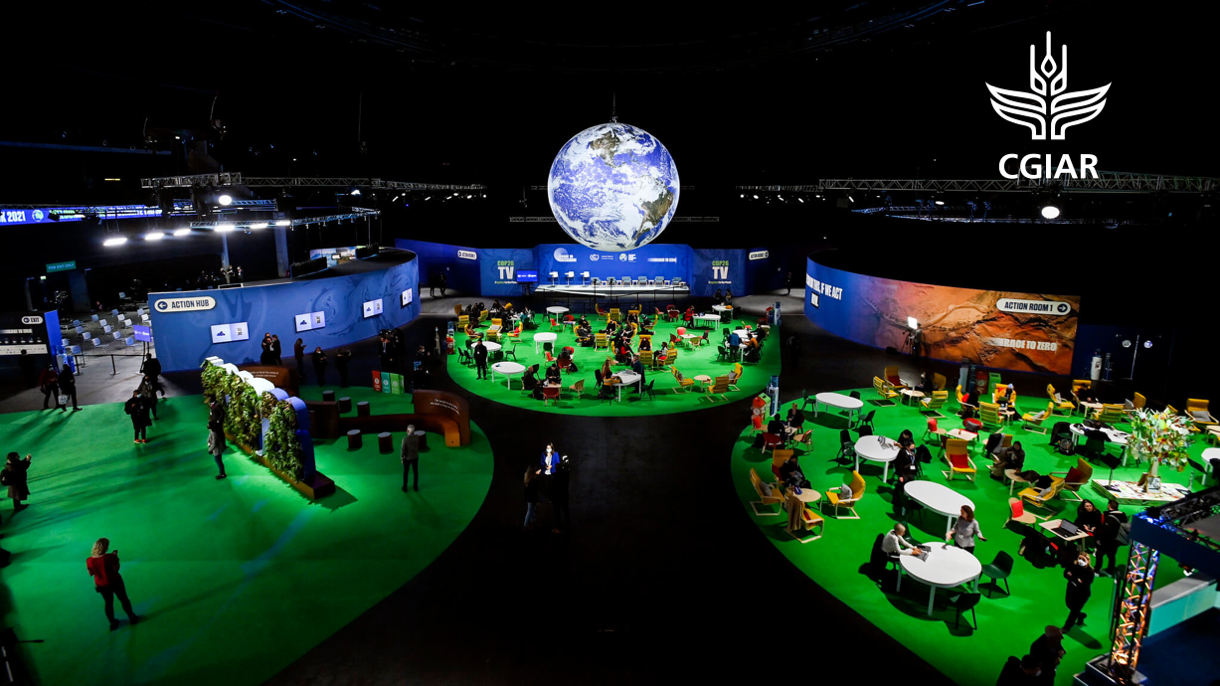 Over the past two weeks, Parties to the United Nations Framework Convention on Climate Change gathered in Glasgow, UK for COP26, the most important climate summit since the landmark Paris Agreement at COP21 in 2015. ​It was the first opportunity for countries to come together to review and step up their national commitments to reduce emissions by 2030. And it was an important moment for global recognition of the need to ramp up adaptation efforts supporting billions of vulnerable people around the world.

At the summit, there was evidence of a growing recognition that without a deep transformation of food, land and water systems, the prospect of keeping global warming well below 2˚C above pre-industrial levels is dim. Likewise, there was increasing acknowledgment of the essential role those systems play in our collective resilience to the climate crisis.

The climate crisis is exacerbating the degradation of food, land, and water systems. These systems are already negatively impacted by food value chains that exploit natural resources beyond planetary boundaries, resulting in waste generation, ecosystem destruction, and biodiversity loss. Combined, these impacts increase the vulnerability of these systems – and the people whose lives and livelihoods depend on them – to extreme events and other shocks such as COVID-19.

The global food system is also a significant contributor to global warming. Responsible for 21–37% of global greenhouse gas emissions, it perpetuates climate threats to itself and other systems critical to rural livelihoods and food and nutrition security.

Demand-led innovation is critical for addressing adaptation and mitigation needs and ensuring that food systems can be a part of the climate solution. And sound scientific evidence is needed to guide the co-development of those innovations, as well as the capacity building, investments and policies that together form an enabling environment for the rapid scaling of innovations needed to transform food, land and water systems.

For half a century, CGIAR has worked together with its valued partners to deliver the best available scientific evidence, insights and innovation for climate adaptation and mitigation in agriculture to farmers, countries, and funders.

Today, climate change is at the heart of CGIAR’s new mission: to deliver science and innovation that advance the transformation of food, land and water systems, in a climate crisis. In addition, Climate Adaptation and Mitigation is one of five new Impact Areas guiding CGIAR’s 2030 Research and Innovation Strategy.

Through its new portfolio of game-changing Initiatives, CGIAR will make meaningful and lasting contributions to collective global targets for climate adaptation and mitigation. To do this, CGIAR Initiatives will tackle priority challenges at the intersection of climate and agriculture at systems level, farm level, and genetic level. The projected climate-related benefits of CGIAR Initiatives are manifold. They include:

Over the course of the COP26 summit, CGIAR’s role as a vital knowledge and science partner for climate action in food, land and water systems was evident. CGIAR leadership spoke in key high-level forums, CGIAR entities co-hosted more than a dozen events with partners on a wide range of topics, and CGIAR researchers participated in many more. You can view CGIAR’s event line-up and watch the recordings here.

Investing in climate impact through CGIAR

At the summit, CGIAR funders and partners also acknowledged CGIAR’s critical contribution to climate solutions for people and planet.

To achieve the SDGs by 2030 – including climate-related goals – a doubling of investment in agricultural research and innovation is needed, and COP26 was an opportune moment to make this goal a reality. At the summit, investors in CGIAR led the way forward with announcements of significant pledges during the World Leaders Summit and further commitments on Nature and Land Use Day, bringing the year’s total to more than US$1 billion. Pledges were made by the Bill & Melinda Gates Foundation, World Bank, United States (USAID), Canada, Sweden, Belgium, and the UK.

Speaking in a European Union event at the COP, Juergen Vogele, Vice President for Sustainable Development of the World Bank, and Chair of the CGIAR System Council, noted the importance of agricultural research and pressed for increased funding from governments, citing the exponentially larger amounts invested in addressing climate change in other sectors, such as transportation. “CGIAR has an annual budget of about 1 billion, it should be funded double, triple, four times as much in order for us to accelerate that transition,” he said.

Bill Gates also recognized CGIAR’s important role in delivering the innovation needed to address climate change. “As part of our work with AIM4C, I’m committing the Gates Foundation to provide an additional $315 million over the next three years to CGIAR,” he said, speaking during the COP26 World Leaders Summit. “CGIAR is an amazing organization that provides breakthrough seeds to smallholder farmers all over the world.”