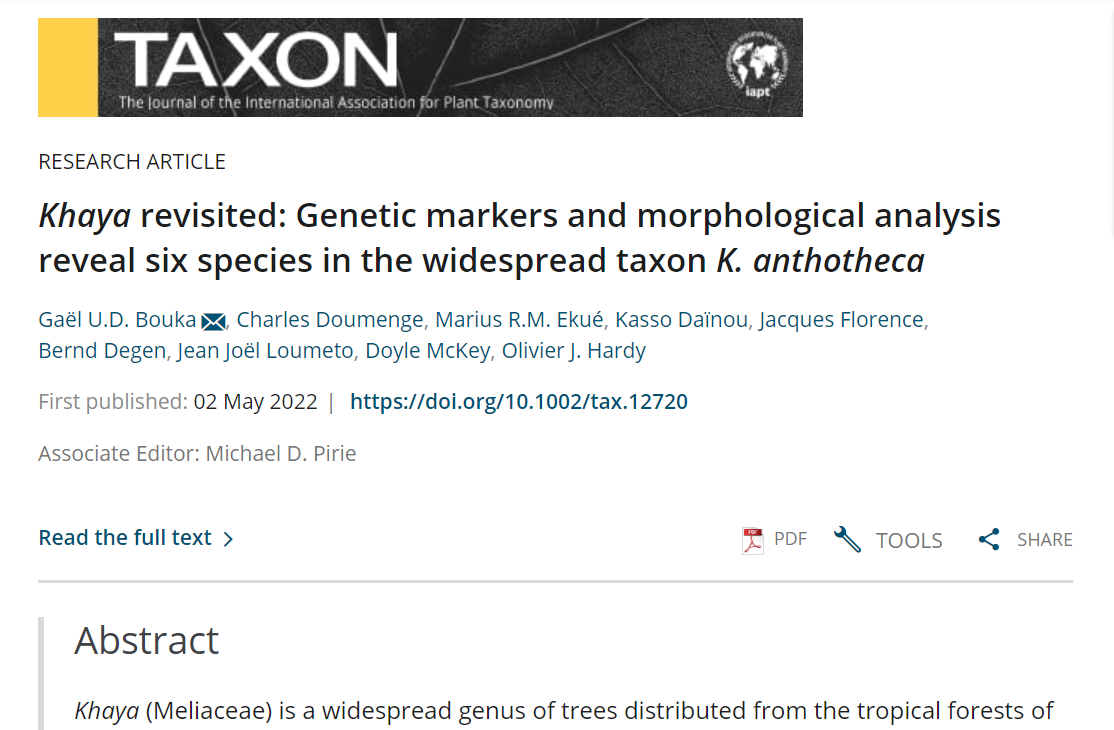 Khaya (Meliaceae) is a widespread genus of trees distributed from the tropical forests of Africa to Madagascar and the Comoros. Khaya species are very close morphologically and some contain considerable phenotypic and ecological diversity, raising the question of their delimitation: this is the case of Khaya anthotheca s.l. (sensu lato, including K. nyasica), which is often lumped with K. grandifoliola and K. ivorensis. We tested species delimitation within K. anthotheca by combining population-genetic and morphological data. First, a visual inspection of over a thousand specimens suggested the existence of five morphogroups. Second, after genotyping 498 samples at 71 nuclear SNPs, Bayesian clustering analyses (STRUCTURE) first identified five genetic clusters (K1–K5), while further analyses subdivided K5 into two clusters.

The six genetic clusters obtained are distributed in parapatry or allopatry from West Africa to East Africa, except for cluster K4, which is in sympatry with K3 in Central Africa. The partitioning of genetic clusters is also largely congruent with the morphogroups identified. The morphological differentiation of these clusters was confirmed by statistical analyses of 27 leaf characters. The clear-cut genetic differentiation between clusters, with few admixed genotypes even in contact zones, argues for the recognition of distinct species following the biological species concept. Our analyses highlight that the current taxonomic treatment of Khaya underestimates by one-half the total number of species. We identify two new species, circumscribe K. anthotheca and support the rehabilitation at the rank of species of three taxa considered to be synonyms of K. anthotheca (K. agboensis, K. euryphylla, K. nyasica). These results illustrate the strength of combining population-genetic and morphological data to delineate an African rainforest tree species complex.