Interactions between food environment and (Un)healthy consumption: Evidence along a rural-urban transect in Viet Nam 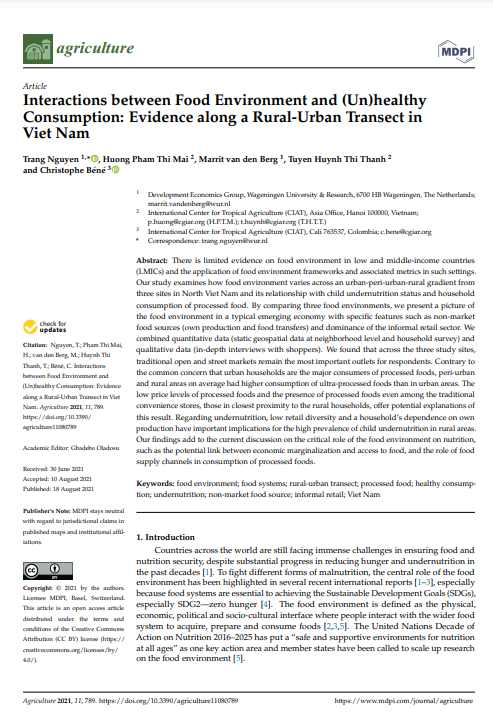 There is limited evidence on food environment in low and middle-income countries (LMICs) and the application of food environment frameworks and associated metrics in such settings. Our study examines how food environment varies across an urban-peri-urban-rural gradient from three sites in North Viet Nam and its relationship with child undernutrition status and household consumption of processed food. By comparing three food environments, we present a picture of the food environment in a typical emerging economy with specific features such as non-market food sources (own production and food transfers) and dominance of the informal retail sector.

We combined quantitative data (static geospatial data at neighborhood level and household survey) and qualitative data (in-depth interviews with shoppers). We found that across the three study sites, traditional open and street markets remain the most important outlets for respondents. Contrary to the common concern that urban households are the major consumers of processed foods, peri-urban and rural areas on average had higher consumption of ultra-processed foods than in urban areas. The low price levels of processed foods and the presence of processed foods even among the traditional convenience stores, those in closest proximity to the rural households, offer potential explanations of this result. Regarding undernutrition, low retail diversity and a household’s dependence on own production have important implications for the high prevalence of child undernutrition in rural areas. Our findings add to the current discussion on the critical role of the food environment on nutrition, such as the potential link between economic marginalization and access to food, and the role of food supply channels in consumption of processed foods.