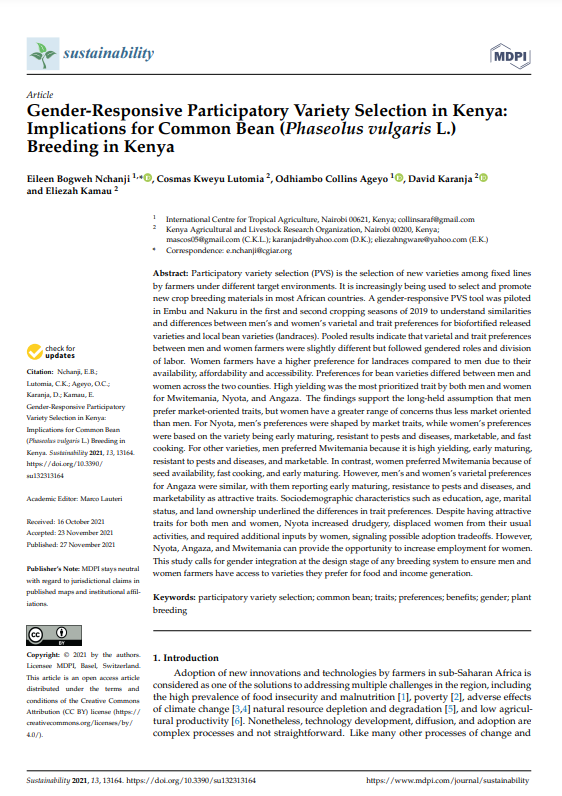 Participatory variety selection (PVS) is the selection of new varieties among fixed lines by farmers under different target environments. It is increasingly being used to select and promote new crop breeding materials in most African countries. A gender-responsive PVS tool was piloted in Embu and Nakuru in the first and second cropping seasons of 2019 to understand similarities and differences between men’s and women’s varietal and trait preferences for biofortified released varieties and local bean varieties (landraces). Pooled results indicate that varietal and trait preferences between men and women farmers were slightly different but followed gendered roles and division of labor. Women farmers have a higher preference for landraces compared to men due to their availability, affordability and accessibility. Preferences for bean varieties differed between men and women across the two counties. High yielding was the most prioritized trait by both men and women for Mwitemania, Nyota, and Angaza. The findings support the long-held assumption that men prefer market-oriented traits, but women have a greater range of concerns thus less market oriented than men. For Nyota, men’s preferences were shaped by market traits, while women’s preferences were based on the variety being early maturing, resistant to pests and diseases, marketable, and fast cooking. For other varieties, men preferred Mwitemania because it is high yielding, early maturing, resistant to pests and diseases, and marketable. In contrast, women preferred Mwitemania because of seed availability, fast cooking, and early maturing. However, men’s and women’s varietal preferences for Angaza were similar, with them reporting early maturing, resistance to pests and diseases, and marketability as attractive traits. Sociodemographic characteristics such as education, age, marital status, and land ownership underlined the differences in trait preferences. Despite having attractive traits for both men and women, Nyota increased drudgery, displaced women from their usual activities, and required additional inputs by women, signaling possible adoption tradeoffs. However, Nyota, Angaza, and Mwitemania can provide the opportunity to increase employment for women. This study calls for gender integration at the design stage of any breeding system to ensure men and women farmers have access to varieties they prefer for food and income generation.