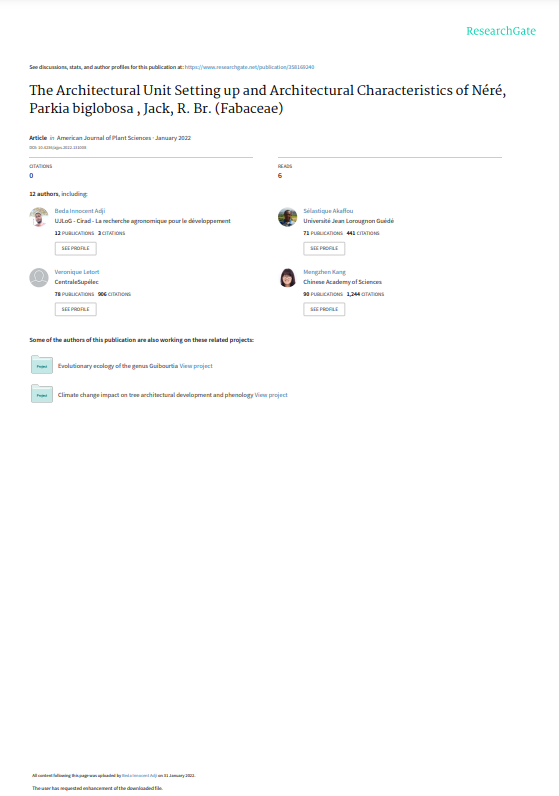 Parkia biglobosa is a much-loved and over-exploited African savannah species for its socio-economic importance. Knowing and taking into account its architectural unit, which is the basis for diagnosing phenology, productivity and tree health, could provide a new perspective on its sustainable management. The aim of this study is to establish the architectural development in Parkia biglobosa by retrospective analysis. To achieve this objective, 390 indi-viduals of all sizes ranging from seedlings to senescent trees were observed and analysed under various soil and climatic conditions in Côte d’Ivoire. The results showed that Parkia biglobosa is a light plant but shading tolerant. It is a mixed vegetative axis plant, the stem is orthotropic* in its proximal part and plagiotropic* (collapsing) in its distal part in young stage.

The tree then tran-sitions to an adult and old stage into a tree with a plagiotropic* axis in the proximal and distal parts, the trunk is built up by superimposing collapsed relay axes that gradually straighten, branching is sympodial*, growth is de-fined and sexuality is terminal and lateral. The ontogeny takes place in three phases: initiation of development and establishment of the crown (young), then flowering and establishment of the architectural unity (adult) and finally the death of secondary axes in the crown, duplication of the architecture by a series of partial and total reiterations (old). The level of organisation is 5: the hytomere, the module or growth unit, the axis, the architectural unit and the reiterated complex. Retrospective analysis of the modules showed that the dimensions of the growth units are indicators of morphological variation and species adaptation to a changing climate (P < 0.05). However, the equations generated by the morphological and habitat dimension linkage models are not significant (R2 and r < 0.7) to be used as a guide for field data collection. This study represents an initiation into the architectural study of this species and the information provided will serve as a basis for further research into the architecture in relation to the sustainable use of this species.