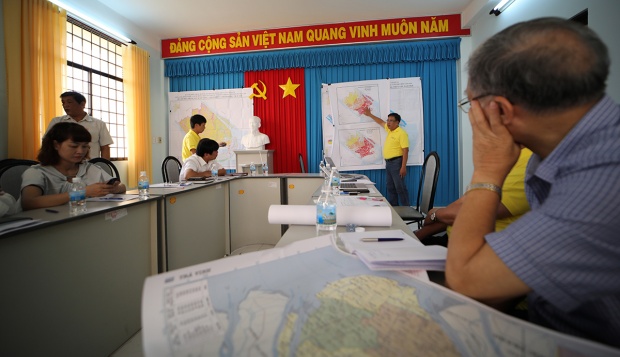 In the Mekong River Delta (MRD), over 1.7 million hectares of land are being used for rice production. This is more than half of the total arable land in the region. To maintain its status as the “rice bowl” of Vietnam, MRD’s rice production sector should be resilient to the different climate-related risks.

Aggravated by occurrence of El Niño–Southern Oscillation (ENSO), MRD has been frequently affected by salinity intrusion and drought during winter-spring season. For instance, during the 2015-2016 ENSO event, El Niño intensified the drought in the region causing rice production loss of 1.2M tons (equivalent to 220,000 hectares).

Several global forecasting centres released an advisory that a mild El Niño will happen from March to May 2019. With this warning, the Department of Crop Production (DCP) of the Ministry of Agriculture and Rural Development (MARD) issued a directive to adjust the planting calendar in the rice production areas in MRD to avoid the impacts of salinity intrusion. The adjustments were guided by the climate-risk related maps and adaptation plans (CS-MAP) developed by the 13 provinces comprising the MRD, DCP MARD and the CGIAR Research Program on Climate Change Agriculture and Food Security in Southeast Asia (CCAFS SEA).

In August 2018, MARD Vice Minister Le Quoc Doanh issued a directive (Announcement no. 6194/TB-BNN-VP) for DCP to monitor the upcoming El Niño and apply the CS-MAP for possible adjustments in the rice planting calendar during the Winter-Spring season. In a meeting with CCAFS SEA, Dr. Nguyen Nhu Cuong, Director General of DCP, emphasized:

The risk maps and cropping calendar maps are a good foundation for the Department of Crop Production and provincial Department Agriculture and Rural Development (DARD) to adjust the planting date of winter-spring season in the Mekong River Delta.”

Based on the reports of the 13 provincial DARDs, areas planting earlier (November 2018) reached 802,702 hectares (from 174,538 ha in 2017) and a reduction in later planting (December to February) to 596,543 (from 1,226,961 ha). This covers more than 600,000 hectares which enables the farmers to avoid the adverse effects of salinity intrusion during winter-spring rice planting season being exacerbated by the ongoing El Niño.

More than a map

The CS-MAP was developed based on the field assessment in MRD conducted by CCAFS and MARD. Additionally, five CGIAR centers participated. Based on the assessment, there is lack of coordination among relevant ministries, line departments, and local authorities in providing climate-risk warnings. Also, the warnings were not translated properly into needed advisories.

As a response, MARD and CCAFS SEA developed the CS-MAP methodology. CS-MAP is a participatory approach to integrate local knowledge and science-based researches in developing climate-related risks maps and adaptation plans, especially those that consider location-specific conditions. With simple color coding (red-high risk, yellow-moderate, and green-safe) the rice areas were mapped in terms of risk to salinity intrusion and flooding.

The implementation of CS-MAP was highly commended by the DCP, MARD, and leaders of the 13 provincial DARD. The maps and proposed adaptation plans were considered key information in developing the medium- and long-term agricultural land use plans of the individual provinces, as well as of the whole MRD. For instance, during the Evaluation of Summer-Autumn Crop Season Conference in 2018, Mr. Le Thanh Tung, Deputy Director of DCP, stressed:

The risk maps developed by CS-MAP helped to identify the rice production areas under climate risk in normal and severe (ENSO) scenarios. Based on the risk maps, recommendations for shifting the cropping pattern and adjusting the rice cropping calendar were also developed for 13 provinces in MRD.”

DCP and CCAFS SEA are now working to downscale the CS-MAP to district and commune levels. Also, they will apply the same methodology in the South Central Coast and Central Highlands regions of the country. The CS-MAP system will also be further developed to include modules for real-time monitoring of rice production progress and provides alerts for climate risks, pests and diseases at different development stages of the crop development.