Undervalued and underutilized – cocoyam is ripe for development 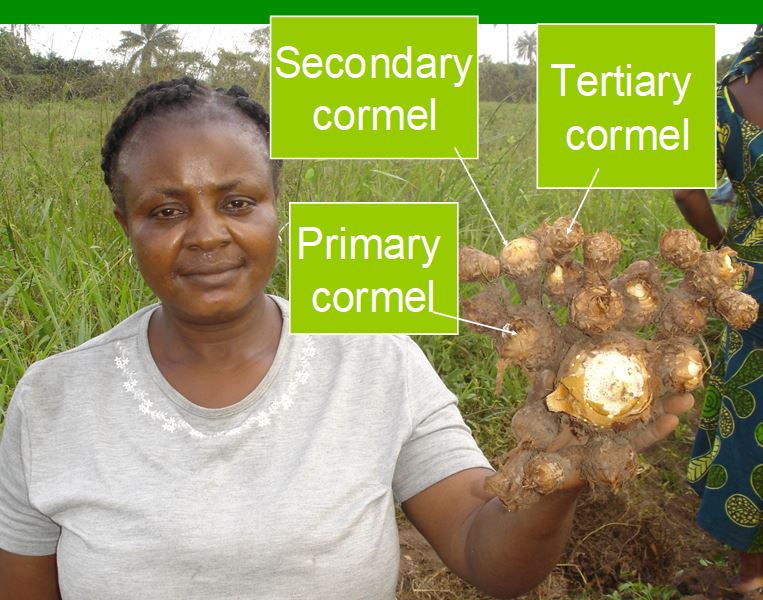 Many readers may never have heard of cocoyam. That’s hardly surprising as this is one of the most neglected crops that we are working on at RTB. Cocoyam in West Africa refers to two different root and tuber crops: tania (Xanthosoma sagittifolium) and taro (Colocasia esculenta). It can be prepared in myriad ways – boiled, fried, steamed or roasted, pounded to make a paste, dried to make flour, or sliced and fried to make chips or flakes. The leaves of the plant are also edible and can be added as a vegetable in dishes such as stews. Whilst less widely grown in West and Central Africa than the major root and tuber crops, cassava and yam, cocoyam can play a key role in food and nutrition security. This crop has widely documented health-giving properties, as well as strong income generation potential for the rural poor, especially women.  In short, cocoyam has a multitude of benefits – so why is it not more highly valued and better utilized?

The answer, it seems, lies partly in the fact that the cocoyam is often dismissed as a ‘woman’s crop’, and the value chain is mainly dominated by women. Except for clearing land for cultivation, women are largely responsible for the production, processing and marketing of this root crop, ensuring a steady supply throughout the year, including during the hungry season. They generally own and manage the finances related to the cocoyam, though men are now becoming involved in cocoyam production, due to its profitability.

Yet despite their contribution to the cocoyam value chain, women are excluded from most decision-making processes and face discrimination in terms of access to land for growing it. Cocoyam is generally cultivated on poor quality land allocated to women by their husbands. Lack of resources means that women cocoyam farmers face several other constraints that limit income-earning opportunities, including inadequate planting material, poor storage – leading to high incidences of rotting, pest and diseases – and inadequate processing facilities. Taro has been especially affected by taro leaf blight, a disease for which presently no resistance is available.

“Empowering women could do much to take this important crop to the next level in Africa, improving production, processing and marketing to increase household incomes and feed the growing population,” said researcher Amala Christiana Okoye. “Women should have stronger rights to production resources such as lands, inputs, and improved seeds at an affordable price, and they should be closely involved in the decision-making process at every stage.”

Women play an important role in ensuring food security, and cocoyam is a rich source of protein and provitamin A carotenoids, as well as iron and zinc. It also offers potential for combating micronutrient deficiencies through nutritional interventions, according to research carried out by Abia State University, Nigeria and supported by the Alliance of Bioversity International and CIAT. A separate study shows that cocoyam flour may play an important role in improving nutrition and combating hidden hunger, while another reveals that the properties of cocoyam starch provide opportunities for use in food systems and industry. Experiments to blend cocoyam flour with wheat flour for biscuit-making in Nigeria showed that the cocoyam component can contribute a significant quantity of mineral elements to the final product, while also reducing dependence on imported wheat flour, with implications for foreign exchange savings.

Despite having attracted little research attention until now, there is evidence that there are plenty of opportunities for improving cocoyam technologies to increase cultivation area and productivity, and for adding value to its starchy roots, extending their shelf-life and generating income. For that to happen, there will need to be more targeted research and investment, into improved varieties and planting material – cocoyam is vulnerable to a range of devastating diseases – as well as into ways of strengthening the value chain linkages between the range of activities required to bring cocoyam from the producer to the consumer.

One initiative that warrants closer inspection for driving a dynamic cocoyam sector is the Women Cocoyam Business Cluster (WCBC) in Nigeria. Based on a model that has already produced results for other commodities, this involves a local network of women cocoyam farmers and interlinked enterprises – post-harvest managers, market agents, aggregators and processors – as well as support services such as input and credit providers, research institutions and transporters. The farms participating in such clusters are geographically close to each other and share common characteristics. Together, these and the other players in the chain have greater clout when it comes to negotiating prices and market access.