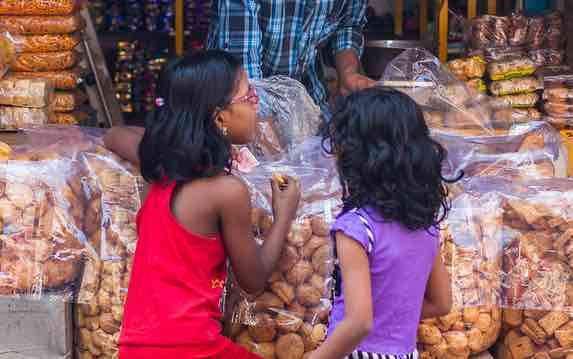 Many developing countries face a double burden of malnutrition, where the prevalence of obesity and noncommunicable diseases (NCDs) linked to overnutrition are rising while undernutrition persists. In India, this phenomenon is a serious threat to public health: Cardiovascular diseases are the leading cause of death while dietary iron deficiency is the biggest contributor to disability.

In 2019, the EAT-Lancet Commission on Food, Planet, and Health proposed a global reference diet aimed at providing adequate nutrition for 10 billion people in 2050 within environmental limits. Though the recommended diet is not always optimal for the context of developing countries, it can help to show where Indian diets fall short in terms of nutrition and suggest areas of improvement. These recommendations can help policymakers navigate the complex food system as it faces new challenges such as changing diets and climate change.

In a research paper published in BMC Public Health, we compare the EAT-Lancet diet’s recommendations with Indian diets across Indian states and income levels using data collected by the National Sample Survey Organization (NSSO) in 2011-12. (This is the latest data available; the 2018-19 survey was scrapped because of data quality issues.) The findings show that compared to the reference diet, the average Indian diet is considered unhealthy, with excessive consumption of cereals, processed foods, and snacks, but not enough protein, fruits, and vegetables. In fact, diets in all Indian regions, income groups, and urban and rural sectors generally exhibit these alarming trends.

Affordability plays a large role in shaping Indian diets. India’s current food policies and budget allocations are focused primarily on keeping staple products such as rice, wheat, and sugarcane affordable through high subsidies and trade regulations. Thus, these crops—easy to grow, yet unhealthy if consumed to excess and often environmentally detrimental—dominate the market and make up a large portion of the average Indian diet. For example, though the EAT-Lancet report recommends that only a third of total calorie intake come from whole grains, they represent up to 70% of some households’ diets.

The costliness of high quality, nutritious foods relative to staple grains also places a burden on many consumers. As a result, there is a serious calorie intake deficit of vegetables, fruits, legumes, and animal sourced proteins in the Indian diet compared to the reference diet. For instance, the poorest Indians get fewer than 130 calories from protein sources (both plant- and animal-based) per day, less than 20% of the recommendation.