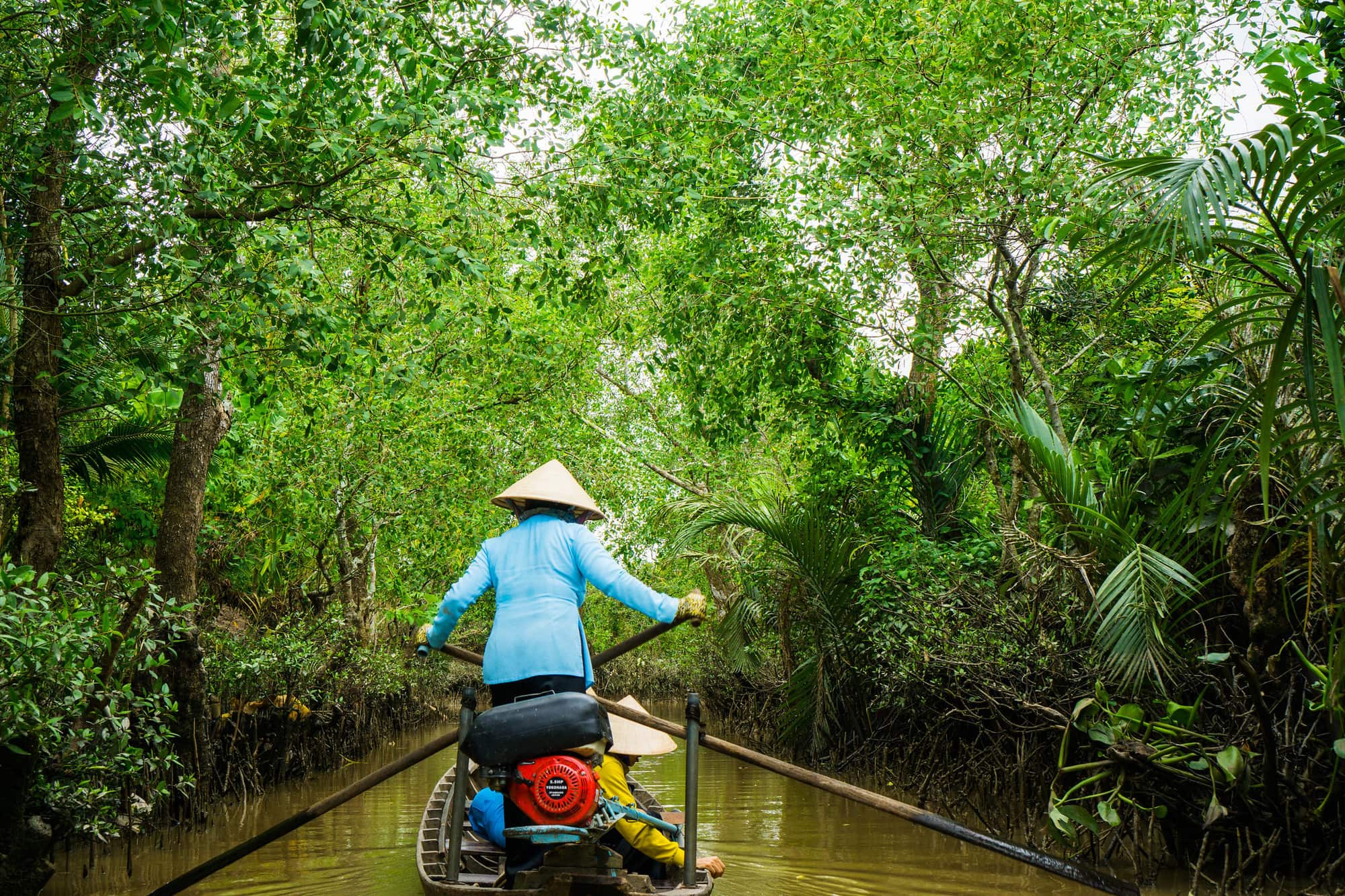 Snaking through six countries in Southeast Asia, the Mekong Delta is one of the longest rivers in the world.

The link between climate and conflicts in the Southeast Asian deltas is channelled through water and food insecurity, where climate change is acting as a threat multiplier. This is particularly true in the Mekong Delta, where adverse climate events such as droughts intensify concerns over water security and create tensions and even conflict among countries that benefit from the river – China, Myanmar, Laos, Cambodia, and Vietnam.

How will climate security research bridge the gaps between the science and the policies needed to allow for adaptation and sustainable peace? Why is the Mekong Delta in Vietnam so vulnerable to climate change and transboundary harm? What needs to be done?

I spoke to the Ph.D. candidate and researcher Dung Phuong Le about the human security dimension of climate security in the Mekong delta region.

Dung is a researcher in a new Climate Security Ph.D. program in partnership between Wageningen University and Research (WUR), CGIAR, and the Stockholm International Peace Research Institute (SIPRI).

The programme sees three young and outstanding all-female candidates represent the global South as well as the North and focus their research on climate security in the Sahel and the Asian deltas of the Mekong and the Ganges.

Hi Dung – could you tell me a bit about your research, and why climate security is needed in the region?

Hi! I’ve just started my Ph.D. with WUR-CGIAR-SIPRI. My research will focus on climate security and food security in the Mekong Delta region. I will assess the impact of climate change and variabilities on conflict, food security, and water security in the region because, as we know, the Mekong delta is heavily affected by extreme weather events, such as sea-level rises, droughts, floods, and salinity intrusion.

The effects are felt by severe human and land deprivation affecting agriculture productivity such as crop and aqua-cultural production and creates water scarcity in the region. Peoples’ livelihoods suffer which would create grievances in the region. Notably, despite this, the region is generally peaceful, in that there is no armed conflict or civil unrest. I am more interested in the human security dimension of the people in the Mekong region.

Could you expand upon this ‘human security dimension to climate security and how you will apply a gender lens to your research?

To apply a human security dimension, in simple terms one is aiming to contribute to a state of ‘freedom from fear’ and ‘freedom from want’. In my opinion, this catches all aspects of being human: economic (employment, housing), social (crime, political voice, human right, mental health, gender equality), and environment (food, water, sanitation, health).

When we think about violent conflict or peace, yes, the region is peaceful, but how sustainable is this peace in the face of extreme weather conditions which have a direct impact on women and other vulnerable groups which live in the Mekong delta region? How safe will women feel if this is the measure of peace?

The ‘gender lens’ threads through all these dimensions but especially the social dimension of human security. Because the problem of gender is uniformity. Women and minority groups, in the rural context, are often far more vulnerable and disproportionately impacted by climate change. There are more than fifty ethnic groups in Vietnam, the Kinh people are the majority. The remaining groups are all ethnic minorities and, in the Mekong Delta, most ethnic minority people are Khmer.

Under the guise of climate security, your research, in many ways, represents a bridge between science, research, and policy, in that such research could supply the evidence needed to influence policy-makers in Vietnam. – How could your research act as this bridge? What is the end goal?

I am interested in Mekong Delta in Vietnam. The region receives a lot of attention, not only from the Government, but from the international community because they are highly affected by climate change, and they are one of the most vulnerable regions to climate change. The Government of Vietnam has an adaptation plan – and it is working, some of these policies are working. However, I want to do a proper impact assessment, on the adaptation strategy and evaluation of that, especially on those vulnerable groups. Because as we know with policy there are always winners and losers, as it can never be perfect.  So, to provide information for the government, to inform policymaking.

It is not only about climate change impact, but what the plan is to mitigate that impact and how the strategy impacts the people. Again, I will measure the human security dimension to ensure peace.

What is unique about the transboundary effects of climate change in the Mekong Delta region of Vietnam?

Because it is a delta – it is the downstream of the river. Any activity from the upstream countries affects those downstream. For example, the construction of hydropower dams affects the water flow and soil quality in the Mekong Delta, which in turn affects the agriculture and fishery in the region. Along the river, there is social tension – in terms of water allocation, infrastructure development – again less likely to lead to armed conflict due to the power symmetry, the cost of having a military response outweighs what we get from having none.

How optimistic are you feeling about the future of climate security in the Mekong Delta?

Due to the vulnerability of the Mekong Delta region, for now, with the support of the international development communities and the government, we do have a good adaptation strategy. However, this does not ipso facto mean that we will avoid all long-term impacts of climate change. Especially with regards to sea-level rise. While there is currently no armed conflict in the region, climate security is still something we need to monitor and analyse, because with a strategic and informed adaptation plan to help the people in the region – extreme and violent conflict could be avoided.

Personally, I am not pessimistic, I am actually more optimistic for the region. But I still think we must have a climate security lens to ensure the development of the region.

And yes, a gender lens is incredibly important in assessing the impacts of climate change on those in the Mekong Deltas. In some ways, I feel that the path to gender equality in Vietnam is a positive one, but at the same time, we must not lose sight of the ‘intersectional’ and different social dimensions which affect one’s livelihood. So, taking the agriculture sector, women in farming, are often looked over due to the male dominance in such a labor-intensive industry.

Very positively, in Vietnam, we do have a women’s union at every level: community, district to national. What they do is empower working women. They are doing a great job of empowering women at the local level in the rural context, offering rights and protection to women which translates to confidence in their work.