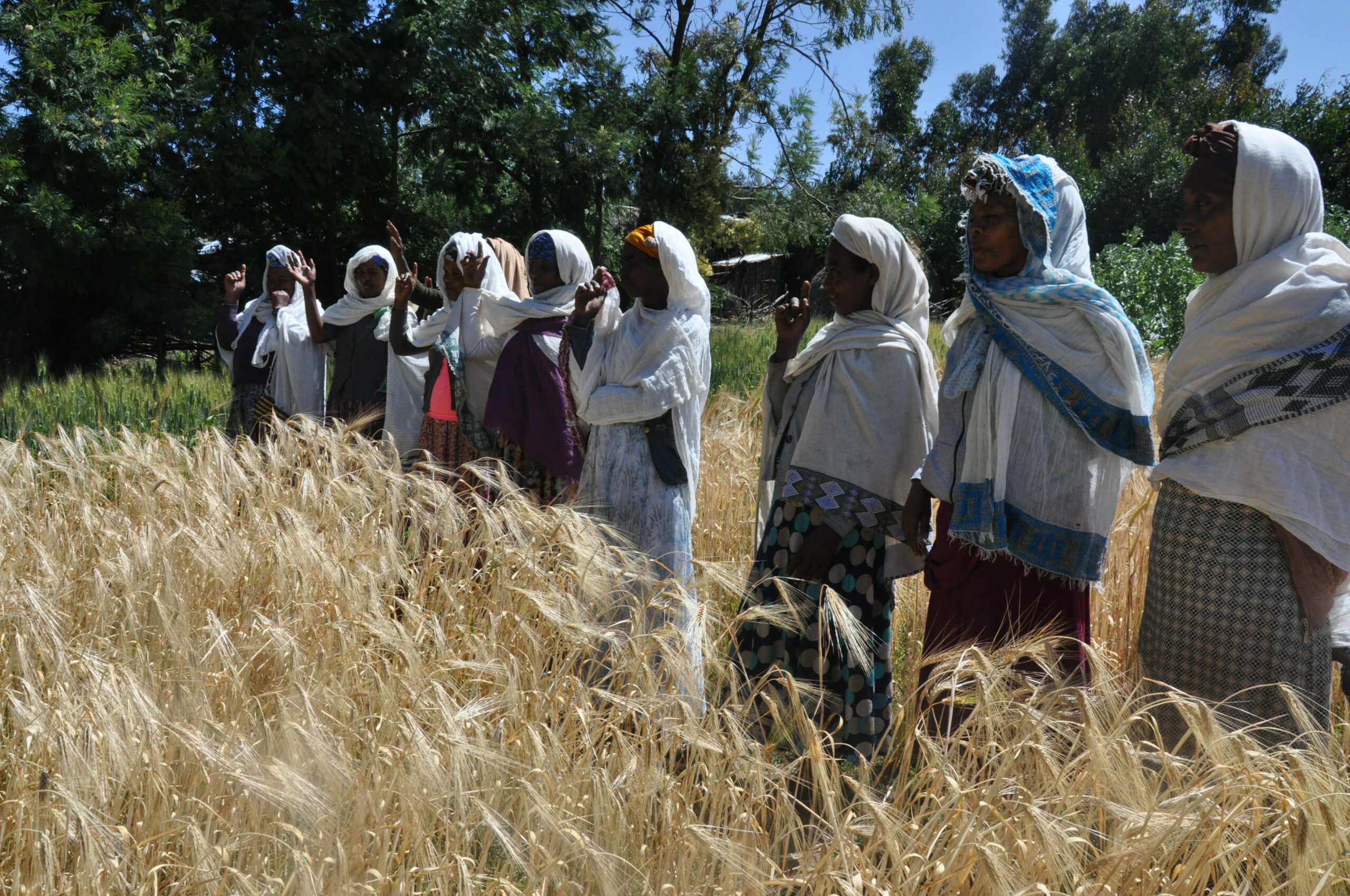 “Barley is the King of Crops!”. This is a popular phrase among farmers in Ethiopia. Indeed, it’s well said! With an estimated annual production of 2.18 tons/ha, cultivated on 811,782 ha of land (CSA, 2019), barley is one of the dominant staple crops in Ethiopia, making immense contribution to human and animal nutrition. It is a multipurpose crop, with varieties used selectively by farmers for food, malt, traditional brews, roofing, and various forms of livestock feed. The intensive multi-purpose use of barley is a long-standing traditional practice in Ethiopia.

ICARDA barley breeders and animal nutritionists, in collaboration with the Debre Berhan Agricultural Research Center, government and university partners, aim to support and optimize this increased use of the barley in mixed livestock systems in North Shewa. As the feed deficit in this region results in untapped potential of livestock production, the goal is to pursue sustainable pathways that simultaneously improve both the quality and quantity of feed, ultimately leading to enhanced economic opportunities along the livelihood improvement pathways of smallholder farmers.

Farmers have traditionally used barley as livestock feed in a variety of forms, using straw, broken grain, and processing atela, a preparation from brewery by-products. Whole plant optimization of the barley crop involves development of cultivars with targeted food-feed or malt-feed traits to a) support the crop residue pathway by enhancing biomass and nutritive quality of straw and b) enhance the by-product pathway by improving grain quality for processing for the production of brewery drinks tella and areki, from which the brewery by-product atela is derived for use as animal feed. In both pathways the yield, nutritional quality and marketability of grains for brewing and human consumption as well as yield and quality (both nutritional and morphological) of straw are targetted for simultaneous development via breeding approaches.

Identifying farmers’ preferences among the available barley varieties is therefore important for developing context-appropriate sustainable intensification (SI) pathways for crop residues and crop by-products. The participatory variety evaluation of barley varieties predominantly grown in North Shewa was the entry point to identify the farmers’ selection criteria when choosing barley varieties, and to have the farmers evaluate varieties against those criteria. This was the focus of the variety assessment field day, which was attended by 131 farmers (65 women and 76 men) on 31 October 2022 in Gudoberet, North Shewa Zone, Amhara Region. Participatory evaluation was conducted on-farm under small-holder farmers’ conditions at 5 sites in the North Shewa Zone. Both individually and randomly allocated to groups, farmers evaluated four food types (Agegnehu, Misrach, Hagere and local Landrace) and four malt types (HB1964, HB1307, Ibon and Holcker) showing a physiological maturity of 80%. They scored the varieties for food products and livestock feed traits. Farmers placed the highest importance on straw yield in both farmer-stated preferences (through scores) and farmer-revealed preferences of criteria (revealed by regressing the overall scores on the scores for the individual criteria). With the exception of IBON and Agegnehu, most of the varieties were rated highly for their straw yield. HB1307, HB1964, Hagere and the local variety were rated as good straw yield by 83.3%, 65.8%, 64.9 and 57.9% of farmers, respectively. High straw yielding varieties with smooth awns and soft stems were considered highly palatable and digestible for livestock. Soft and easily breakable straw is the highest-grade straw and is fed to dairy cows and fattening animals. The food types, Agegnehu, Misrach, Hagere are particularly preferred for dairy cows. Although malt barley varieties are smooth types, they are not suitable for livestock as their stems are very strong and sturdy. This trait is usually beneficial to resist lodging. However, these malt types are said to cause animal health problems such like coughing and body emaciation, which may be due to mycotoxin poisoning. This may be related to the high moisture content of the stems of malt types, making them difficult to dry, and thus susceptible to fungal infections.

The criteria for straw ranking did not differ between male and female farmers. However, this was not the case with grain scoring. Men ranked the yield and marketability of grain very highly. Kelemuwa Ergete, a female participant and barley farmer, highlighted the importance of women’s participation in the evaluation and selection to determine the best varieties for traditional food and drink made from barley. The women use qualitative indigenous knowledge to evaluate the varieties for food and feed traits.

Ethiopia is known as a global center of diversity for barley. The selected varieties in this evaluation signify tradeoffs associated with the different varieties. Studies on food-feed barley are underway by ICARDA animal nutritionists and breeders. High grain yield is inevitably a primary criterion for the entire communities. The crop residue SI pathway will target varieties with both high grain yield as well as high straw quantity and quality. This intervention is aimed at youth and women sheep fattening groups seeking feed availability and quality for enhanced fattening performance. The feed mechanization component has been integrated in this intervention to add an economic activity related to the straw that would improve income generation of the SF youth and women groups. The crop-by products pathway is aimed at women groups engaged in atela production whose value chain targets the Debreberhan milk shed of commercialized dairy production, beef fattening and sheep fattening, by farmers and cooperated youth groups in North Shewa.  The gender component has been integrated to assess and understand the role and effects of gender in barley-livestock system, which will be vital to overcoming gender yield disparities and power imbalances, as well as inhibiting gender norms.

“It is also possible to intensify farm activities without reduction of crop and livestock components. This wholly depends on farmer’s willingness to invest in different intensification options.”

Reference: Central Statistical Agency (CSA) (2019) The federal democratic republic of Ethiopia reports on the area and production of major crops.