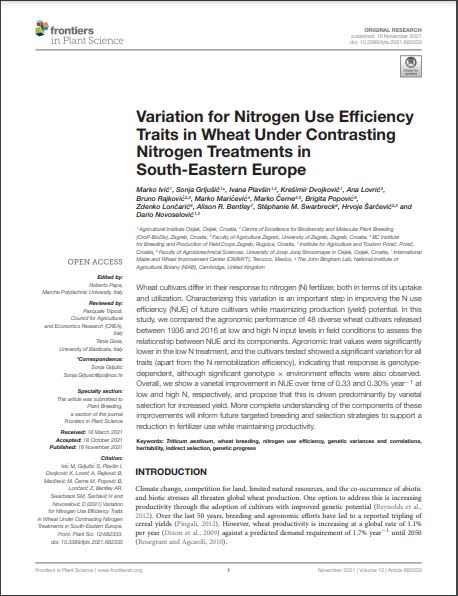 Wheat cultivars differ in their response to nitrogen (N) fertilizer, both in terms of its uptake and utilization. Characterizing this variation is an important step in improving the N use efficiency (NUE) of future cultivars while maximizing production (yield) potential. In this study, we compared the agronomic performance of 48 diverse wheat cultivars released between 1936 and 2016 at low and high N input levels in field conditions to assess the relationship between NUE and its components. Agronomic trait values were significantly lower in the low N treatment, and the cultivars tested showed a significant variation for all traits (apart from the N remobilization efficiency), indicating that response is genotype-dependent, although significant genotype × environment effects were also observed. Overall, we show a varietal improvement in NUE over time of 0.33 and 0.30% year–1 at low and high N, respectively, and propose that this is driven predominantly by varietal selection for increased yield. More complete understanding of the components of these improvements will inform future targeted breeding and selection strategies to support a reduction in fertilizer use while maintaining productivity.