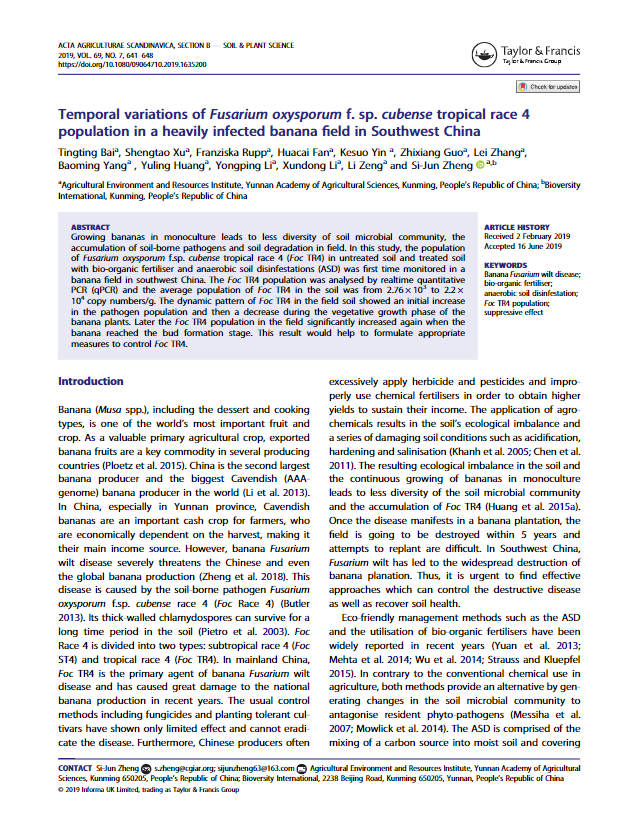 Growing bananas in monoculture leads to less diversity of soil microbial community, the accumulation of soil-borne pathogens and soil degradation in field. In this study, the population of Fusarium oxysporum f.sp. cubense tropical race 4 (Foc TR4) in untreated soil and treated soil with bio-organic fertiliser and anaerobic soil disinfestations (ASD) was first time monitored in a banana field in southwest China. The Foc TR4 population was analysed by realtime quantitative PCR (qPCR) and the average population of Foc TR4 in the soil was from 2.76 × 103 to 2.2 × 104 copy numbers/g. The dynamic pattern of Foc TR4 in the field soil showed an initial increase in the pathogen population and then a decrease during the vegetative growth phase of the banana plants. Later the Foc TR4 population in the field significantly increased again when the banana reached the bud formation stage. This result would help to formulate appropriate measures to control Foc TR4.