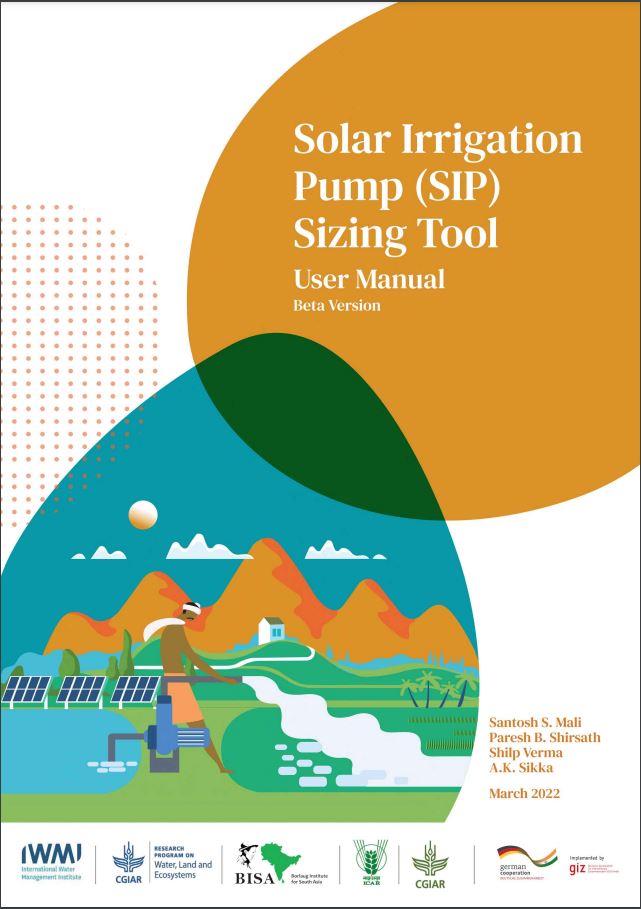 In most regions in the ‘Global South’, solar photovoltaic pumps can offer 1,400 – 2,200 peak-hours of reliable and affordable green energy for irrigation. With unit costs declining by the day, and significant promotion by state and union government, it is not surprising that solar pumps are rapidly expanding in India. Over the next few years, PM-KUSUM, the Government of India’s ambitious campaign is expected to invest 34,035 crores (approx. US$ 4.6 billion) to support the installation of 3.5 million solar irrigation pumps. This can help significantly expand irrigated area; make irrigation more affordable and accessible for smallholders; reduce pressure on electricity utilities to supply subsidised electricity to farmers; eliminate pump irrigation’s carbon footprint; and improve the overall returns from agriculture. Selection of optimally sized solar pumping systems is a challenging task, not least because farmers’ demand for energy for irrigation is a complex, derived demand. Keeping in view the huge investments by the governments in solarization of agriculture, design of pump sets based on scientific protocols therefore has a key role in large scale adoption of solar pumping systems. The sizing of solar irrigation pumping systems involves a set of complex algorithms, each addressing a specific module in the design procedure. Several technical, biophysical and social factors govern the pump set size, which needs to be properly accounted while designing a matching solar pumping system. The Beta version of the Solar Irrigation Pump (SIP) sizing tool is aimed at assisting farmers, researchers and technical persons involved in adoption and promotion of solar pumping systems across India. The tool has universal applicability in the sense that it uses nationwide datasets on climate, soils and crops, wherein users can fetch the required data for the location of interest. The tool presented in this manual is comprised of four modules viz. crop water requirement module, discharge estimation module, head loss estimation module and the pump selection module which works on the principles laid down by the Ministry of New and Renewable Energy (MNRE), Government of India.The manual is designed to offer basic information about solar pump sizing and to provide the step-by-step procedure to work with SIP Sizing tool to solve real-world problems. This technical manual is divided in two parts. The first part explains the basic concepts and procedures in solar pump designing while the second part deals with the step-by-step procedure to use the MS Excel based Beta version of the SIP sizing tool. This ‘Beta version’ of the tool has been shared with solar pump manufacturers and industry experts during two (virtual) consultations co-organized with GIZ and MNRE. During both of these, the tool received positive feedback and useful suggestions for improvement. The tool was also shared with state nodal agencies for PM-KUSUM during a training workshop organized by MNRE. Going forward, MNRE has suggested that a mobile version of the tool should be developed by HKRP Innovations LLP. IWMI and ICAR have reiterated their commitment to support GIZ, MNRE and HKRP in mobile version development as well as development of future versions of the tool based on user inputs and feedback.