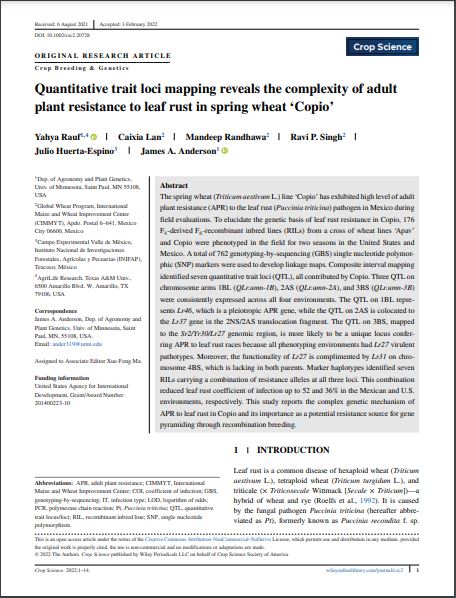 The spring wheat (Triticum aestivum L.) line ‘Copio’ has exhibited high level of adult plant resistance (APR) to the leaf rust (Puccinia triticina) pathogen in Mexico during field evaluations. To elucidate the genetic basis of leaf rust resistance in Copio, 176 F4-derived F6-recombinant inbred lines (RILs) from a cross of wheat lines ‘Apav’ and Copio were phenotyped in the field for two seasons in the United States and Mexico. A total of 762 genotyping-by-sequencing (GBS) single nucleotide polymorphic (SNP) markers were used to develop linkage maps. Composite interval mapping identified seven quantitative trait loci (QTL), all contributed by Copio. Three QTL on chromosome arms 1BL (QLr.umn-1B), 2AS (QLr.umn-2A), and 3BS (QLr.umn-3B) were consistently expressed across all four environments. The QTL on 1BL represents Lr46, which is a pleiotropic APR gene, while the QTL on 2AS is colocated to the Lr37 gene in the 2NS/2AS translocation fragment. The QTL on 3BS, mapped to the Sr2/Yr30/Lr27 genomic region, is more likely to be a unique locus conferring APR to leaf rust races because all phenotyping environments had Lr27 virulent pathotypes. Moreover, the functionality of Lr27 is complimented by Lr31 on chromosome 4BS, which is lacking in both parents. Marker haplotypes identified seven RILs carrying a combination of resistance alleles at all three loci. This combination reduced leaf rust coefficient of infection up to 52 and 36% in the Mexican and U.S. environments, respectively. This study reports the complex genetic mechanism of APR to leaf rust in Copio and its importance as a potential resistance source for gene pyramiding through recombination breeding.