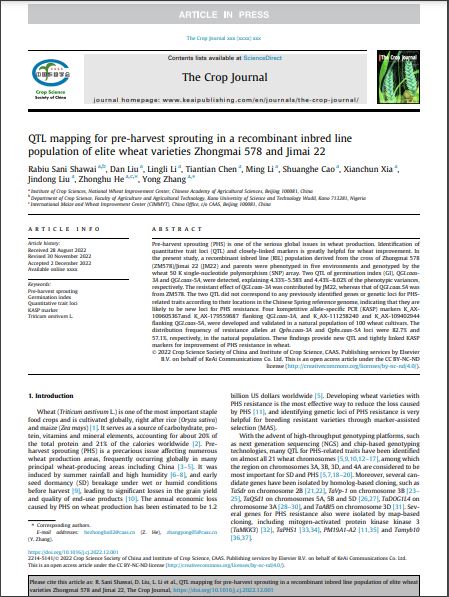 Pre-harvest sprouting (PHS) is one of the serious global issues in wheat production. Identification of quantitative trait loci (QTL) and closely-linked markers is greatly helpful for wheat improvement. In the present study, a recombinant inbred line (RIL) population derived from the cross of Zhongmai 578 (ZM578)/Jimai 22 (JM22) and parents were phenotyped in five environments and genotyped by the wheat 50 K single-nucleotide polymorphism (SNP) array. Two QTL of germination index (GI), QGI.caas-3A and QGI.caas-5A, were detected, explaining 4.33%–5.58% and 4.43%–8.02% of the phenotypic variances, respectively. The resistant effect of QGI.caas-3A was contributed by JM22, whereas that of QGI.caas.5A was from ZM578. The two QTL did not correspond to any previously identified genes or genetic loci for PHS-related traits according to their locations in the Chinese Spring reference genome, indicating that they are likely to be new loci for PHS resistance. Four kompetitive allele-specific PCR (KASP) markers K_AX-109605367and K_AX-179559687 flanking QGI.caas-3A, and K_AX-111258240 and K_AX-109402944 flanking QGI.caas-5A, were developed and validated in a natural population of 100 wheat cultivars. The distribution frequency of resistance alleles at Qphs.caas-3A and Qphs.caas-5A loci were 82.7% and 57.1%, respectively, in the natural population. These findings provide new QTL and tightly linked KASP markers for improvement of PHS resistance in wheat.