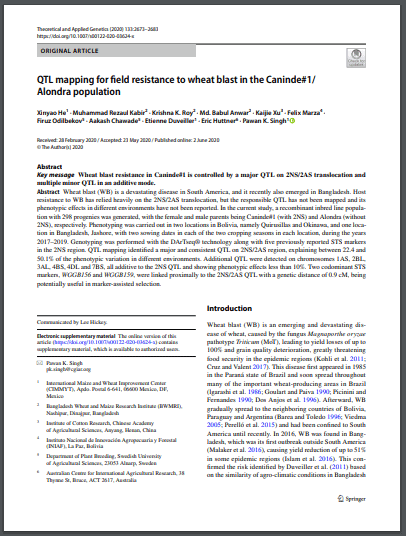 Wheat blast (WB) is a devastating disease in South America, and it recently also emerged in Bangladesh. Host resistance to WB has relied heavily on the 2NS/2AS translocation, but the responsible QTL has not been mapped and its phenotypic effects in different environments have not been reported. In the current study, a recombinant inbred line population with 298 progenies was generated, with the female and male parents being Caninde#1 (with 2NS) and Alondra (without 2NS), respectively. Phenotyping was carried out in two locations in Bolivia, namely Quirusillas and Okinawa, and one location in Bangladesh, Jashore, with two sowing dates in each of the two cropping seasons in each location, during the years 2017–2019. Genotyping was performed with the DArTseq® technology along with five previously reported STS markers in the 2NS region. QTL mapping identified a major and consistent QTL on 2NS/2AS region, explaining between 22.4 and 50.1% of the phenotypic variation in different environments. Additional QTL were detected on chromosomes 1AS, 2BL, 3AL, 4BS, 4DL and 7BS, all additive to the 2NS QTL and showing phenotypic effects less than 10%. Two codominant STS markers, WGGB156 and WGGB159, were linked proximally to the 2NS/2AS QTL with a genetic distance of 0.9 cM, being potentially useful in marker-assisted selection.