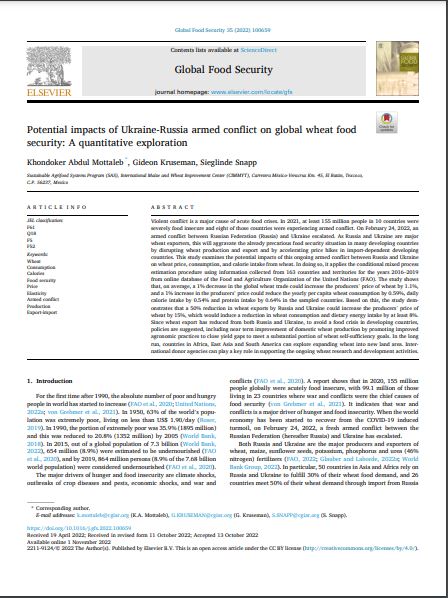 Violent conflict is a major cause of acute food crises. In 2021, at least 155 million people in 10 countries were severely food insecure and eight of those countries were experiencing armed conflict. On February 24, 2022, an armed conflict between Russian Federation (Russia) and Ukraine escalated. As Russia and Ukraine are major wheat exporters, this will aggravate the already precarious food security situation in many developing countries by disrupting wheat production and export and by accelerating price hikes in import-dependent developing countries. This study examines the potential impacts of this ongoing armed conflict between Russia and Ukraine on wheat price, consumption, and calorie intake from wheat. In doing so, it applies the conditional mixed process estimation procedure using information collected from 163 countries and territories for the years 2016–2019 from online database of the Food and Agriculture Organization of the United Nations (FAO). The study shows that, on average, a 1% decrease in the global wheat trade could increase the producers’ price of wheat by 1.1%, and a 1% increase in the producers’ price could reduce the yearly per capita wheat consumption by 0.59%, daily calorie intake by 0.54% and protein intake by 0.64% in the sampled countries. Based on this, the study demonstrates that a 50% reduction in wheat exports by Russia and Ukraine could increase the producers’ price of wheat by 15%, which would induce a reduction in wheat consumption and dietary energy intake by at least 8%. Since wheat export has reduced from both Russia and Ukraine, to avoid a food crisis in developing countries, policies are suggested, including near term improvement of domestic wheat production by promoting improved agronomic practices to close yield gaps to meet a substantial portion of wheat self-sufficiency goals. In the long run, countries in Africa, East Asia and South America can explore expanding wheat into new land area. International donor agencies can play a key role in supporting the ongoing wheat research and development activities.