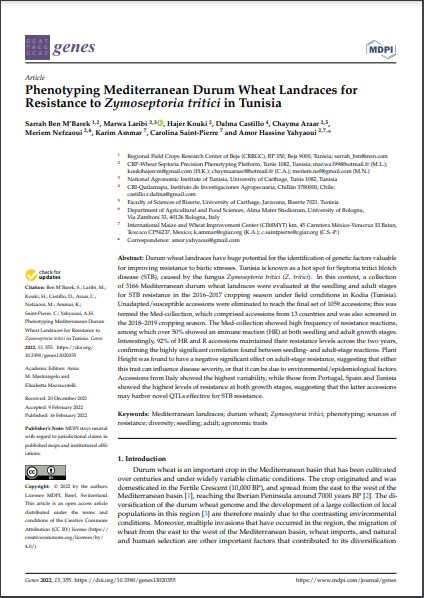 Durum wheat landraces have huge potential for the identification of genetic factors valuable for improving resistance to biotic stresses. Tunisia is known as a hot spot for Septoria tritici blotch disease (STB), caused by the fungus Zymoseptoria tritici (Z. tritici). In this context, a collection of 3166 Mediterranean durum wheat landraces were evaluated at the seedling and adult stages for STB resistance in the 2016–2017 cropping season under field conditions in Kodia (Tunisia). Unadapted/susceptible accessions were eliminated to reach the final set of 1059 accessions; this was termed the Med-collection, which comprised accessions from 13 countries and was also screened in the 2018–2019 cropping season. The Med-collection showed high frequency of resistance reactions, among which over 50% showed an immune reaction (HR) at both seedling and adult growth stages. Interestingly, 92% of HR and R accessions maintained their resistance levels across the two years, confirming the highly significant correlation found between seedling-and adult-stage reactions. Plant Height was found to have a negative significant effect on adult-stage resistance, suggesting that either this trait can influence disease severity, or that it can be due to environmental/epidemiological factors. Accessions from Italy showed the highest variability, while those from Portugal, Spain and Tunisia showed the highest levels of resistance at both growth stages, suggesting that the latter accessions may harbor novel QTLs effective for STB resistance.