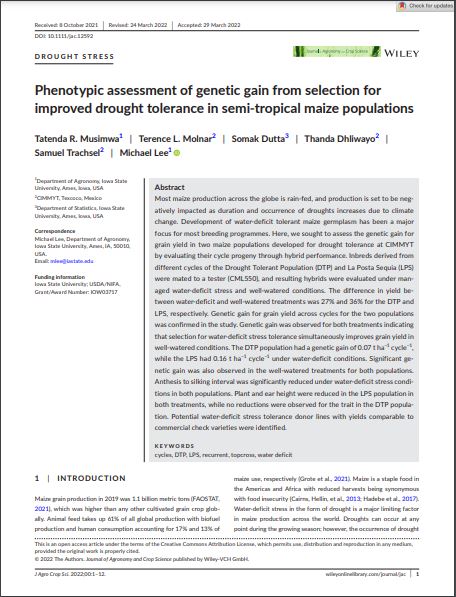 Most maize production across the globe is rain-fed, and production is set to be negatively impacted as duration and occurrence of droughts increases due to climate change. Development of water-deficit tolerant maize germplasm has been a major focus for most breeding programmes. Here, we sought to assess the genetic gain for grain yield in two maize populations developed for drought tolerance at CIMMYT by evaluating their cycle progeny through hybrid performance. Inbreds derived from different cycles of the Drought Tolerant Population (DTP) and La Posta Sequia (LPS) were mated to a tester (CML550), and resulting hybrids were evaluated under managed water-deficit stress and well-watered conditions. The difference in yield between water-deficit and well-watered treatments was 27% and 36% for the DTP and LPS, respectively. Genetic gain for grain yield across cycles for the two populations was confirmed in the study. Genetic gain was observed for both treatments indicating that selection for water-deficit stress tolerance simultaneously improves grain yield in well-watered conditions. The DTP population had a genetic gain of 0.07 t ha−1 cycle−1, while the LPS had 0.16 t ha−1 cycle−1 under water-deficit conditions. Significant genetic gain was also observed in the well-watered treatments for both populations. Anthesis to silking interval was significantly reduced under water-deficit stress conditions in both populations. Plant and ear height were reduced in the LPS population in both treatments, while no reductions were observed for the trait in the DTP population. Potential water-deficit stress tolerance donor lines with yields comparable to commercial check varieties were identified.