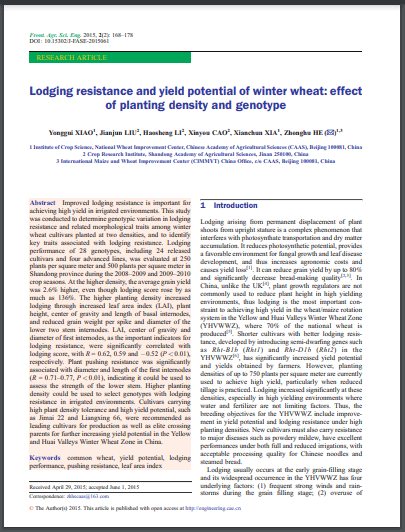 Improved lodging resistance is important for achieving high yield in irrigated environments. This study was conducted to determine genotypic variation in lodging resistance and related morphological traits among winter wheat cultivars planted at two densities, and to identify key traits associated with lodging resistance. Lodging performance of 28 genotypes, including 24 released cultivars and four advanced lines, was evaluated at 250 plants per square meter and 500 plants per square meter in Shandong province during the 2008–2009 and 2009–2010 crop seasons. At the higher density, the average grain yield was 2.6% higher, even though lodging score rose by as much as 136%. The higher planting density increased lodging through increased leaf area index (LAI), plant height, center of gravity and length of basal internodes, and reduced grain weight per spike and diameter of the lower two stem internodes. LAI, center of gravity and diameter of first internodes, as the important indicators for lodging resistance, were significantly correlated with lodging score, with R = 0.62, 0.59 and – 0.52 (P<0.01), respectively. Plant pushing resistance was significantly associated with diameter and length of the first internodes (R = 0.71–0.77, P<0.01), indicating it could be used to assess the strength of the lower stem. Higher planting density could be used to select genotypes with lodging resistance in irrigated environments. Cultivars carrying high plant density tolerance and high yield potential, such as Jimai 22 and Liangxing 66, were recommended as leading cultivars for production as well as elite crossing parents for further increasing yield potential in the Yellow and Huai Valleys Winter Wheat Zone in China.