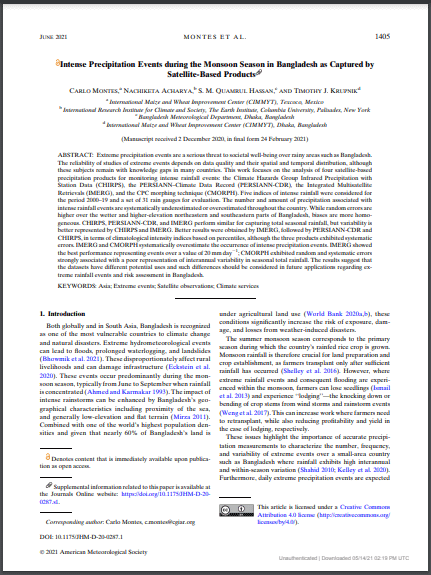 Extreme precipitation events are a serious threat to societal well-being over rainy areas such as Bangladesh. The reliability of studies of extreme events depends on data quality and their spatial and temporal distribution, although these subjects remain with knowledge gaps in many countries. This work focuses on the analysis of four satellite-based precipitation products for monitoring intense rainfall events: the Climate Hazards Group Infrared Precipitation with Station Data (CHIRPS), the PERSIANN–Climate Data Record (PERSIANN-CDR), the Integrated Multisatellite Retrievals (IMERG), and the CPC morphing technique (CMORPH). Five indices of intense rainfall were considered for the period 2000–19 and a set of 31 rain gauges for evaluation. The number and amount of precipitation associated with intense rainfall events are systematically underestimated or overestimated throughout the country. While random errors are higher over the wetter and higher-elevation northeastern and southeastern parts of Bangladesh, biases are more homogeneous. CHIRPS, PERSIANN-CDR, and IMERG perform similar for capturing total seasonal rainfall, but variability is better represented by CHIRPS and IMERG. Better results were obtained by IMERG, followed by PERSIANN-CDR and CHIRPS, in terms of climatological intensity indices based on percentiles, although the three products exhibited systematic errors. IMERG and CMORPH systematically overestimate the occurrence of intense precipitation events. IMERG showed the best performance representing events over a value of 20 mm day−1; CMORPH exhibited random and systematic errors strongly associated with a poor representation of interannual variability in seasonal total rainfall. The results suggest that the datasets have different potential uses and such differences should be considered in future applications regarding extreme rainfall events and risk assessment in Bangladesh.