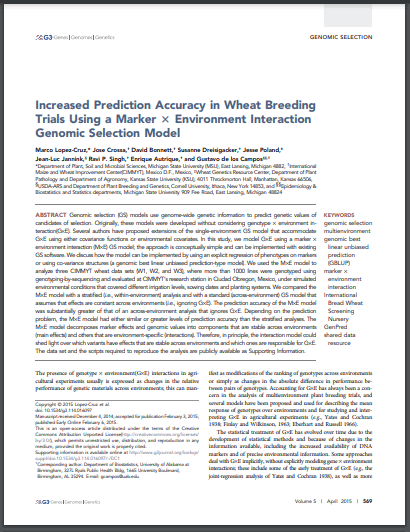 Genomic selection (GS) models use genome-wide genetic information to predict genetic values of candidates of selection. Originally, these models were developed without considering genotype · environment interaction( G·E). Several authors have proposed extensions of the single-environment GS model that accommodate G·E using either covariance functions or environmental covariates. In this study, we model G·E using a marker · environment interaction (M·E) GS model; the approach is conceptually simple and can be implemented with existing GS software.We discuss how themodel can be implemented by using an explicit regression of phenotypes on markers or using co-variance structures (a genomic best linear unbiased prediction-type model). We used the M·E model to analyze three CIMMYT wheat data sets (W1, W2, and W3), where more than 1000 lines were genotyped using genotyping-by-sequencing and evaluated at CIMMYT’s research station in Ciudad Obregon, Mexico, under simulated environmental conditions that covered different irrigation levels, sowing dates and planting systems.We compared the M·E model with a stratified (i.e., within-environment) analysis and with a standard (across-environment) GS model that assumes that effects are constant across environments (i.e., ignoring G·E). The prediction accuracy of the M·E model was substantially greater of that of an across-environment analysis that ignores G·E. Depending on the prediction problem, the M·E model had either similar or greater levels of prediction accuracy than the stratified analyses. The M·E model decomposes marker effects and genomic values into components that are stable across environments (main effects) and others that are environment-specific (interactions). Therefore, in principle, the interaction model could shed light over which variants have effects that are stable across environments and which ones are responsible for G·E. The data set and the scripts required to reproduce the analysis are publicly available as Supporting Information.