Impact and opportunities of agroecological intensification strategies on farm performance: A case study of banana-based systems in Central and South-Western Uganda 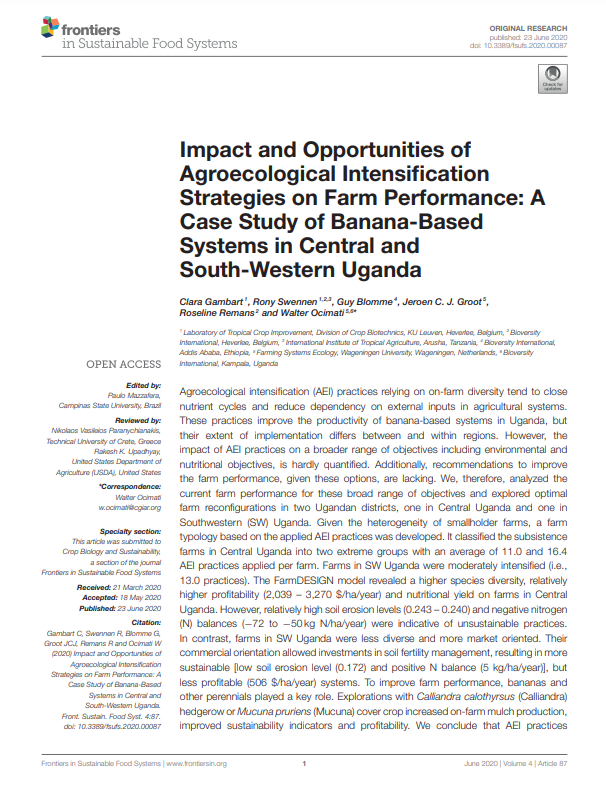 Agroecological intensification (AEI) practices relying on on-farm diversity tend to close nutrient cycles and reduce dependency on external inputs in agricultural systems. These practices improve the productivity of banana-based systems in Uganda, but their extent of implementation differs between and within regions. However, the impact of AEI practices on a broader range of objectives including environmental and nutritional objectives, is hardly quantified. Additionally, recommendations to improve the farm performance, given these options, are lacking.

We, therefore, analyzed the current farm performance for these broad range of objectives and explored optimal farm reconfigurations in two Ugandan districts, one in Central Uganda and one in Southwestern (SW) Uganda. Given the heterogeneity of smallholder farms, a farm typology based on the applied AEI practices was developed. It classified the subsistence farms in Central Uganda into two extreme groups with an average of 11.0 and 16.4 AEI practices applied per farm. Farms in SW Uganda were moderately intensified (i.e., 13.0 practices). The FarmDESIGN model revealed a higher species diversity, relatively higher profitability (2,039 – 3,270 $/ha/year) and nutritional yield on farms in Central Uganda. However, relatively high soil erosion levels (0.243 – 0.240) and negative nitrogen (N) balances (−72 to −50 kg N/ha/year) were indicative of unsustainable practices. In contrast, farms in SW Uganda were less diverse and more market oriented.