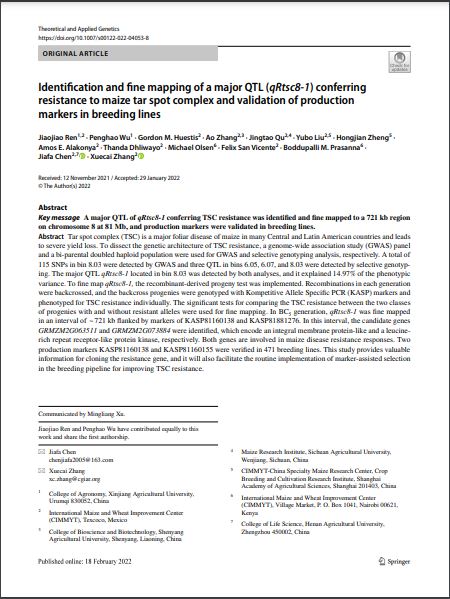 Tar spot complex (TSC) is a major foliar disease of maize in many Central and Latin American countries and leads to severe yield loss. To dissect the genetic architecture of TSC resistance, a genome-wide association study (GWAS) panel and a bi-parental doubled haploid population were used for GWAS and selective genotyping analysis, respectively. A total of 115 SNPs in bin 8.03 were detected by GWAS and three QTL in bins 6.05, 6.07, and 8.03 were detected by selective genotyping. The major QTL qRtsc8-1 located in bin 8.03 was detected by both analyses, and it explained 14.97% of the phenotypic variance. To fine map qRtsc8-1, the recombinant-derived progeny test was implemented. Recombinations in each generation were backcrossed, and the backcross progenies were genotyped with Kompetitive Allele Specific PCR (KASP) markers and phenotyped for TSC resistance individually. The significant tests for comparing the TSC resistance between the two classes of progenies with and without resistant alleles were used for fine mapping. In BC5 generation, qRtsc8-1 was fine mapped in an interval of ~ 721 kb flanked by markers of KASP81160138 and KASP81881276. In this interval, the candidate genes GRMZM2G063511 and GRMZM2G073884 were identified, which encode an integral membrane protein-like and a leucine-rich repeat receptor-like protein kinase, respectively. Both genes are involved in maize disease resistance responses. Two production markers KASP81160138 and KASP81160155 were verified in 471 breeding lines. This study provides valuable information for cloning the resistance gene, and it will also facilitate the routine implementation of marker-assisted selection in the breeding pipeline for improving TSC resistance.