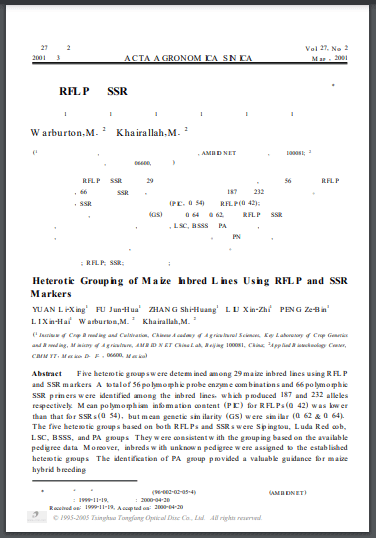 Five heterotic groups were determined among 29 maize inbred lines using RFLP and SSR markers. A total of 56 polymorphic probe enzyme combinations and 66 polymorphic SSR primers were identified among the inbred lines, which produced 187 and 232 alleles respectively. Mean polymorphism information content (PIC) for RFLPs (0.42) was lower than that for SSRs (0.54), but mean genetic similarity (GS) were similar (0.62 & 0.64). The five heterotic groups based on both RFLPs and SSRs were Sipingtou, Luda Red cob, LSC, BSSS, and PA groups. They were consistent with the group ing based on the available pedigree data. Moreover, inbreds with unknown pedigree were assigned to the established heterotic groups. The identification of PA group provided a valuable guidance for maize hybrid breeding.