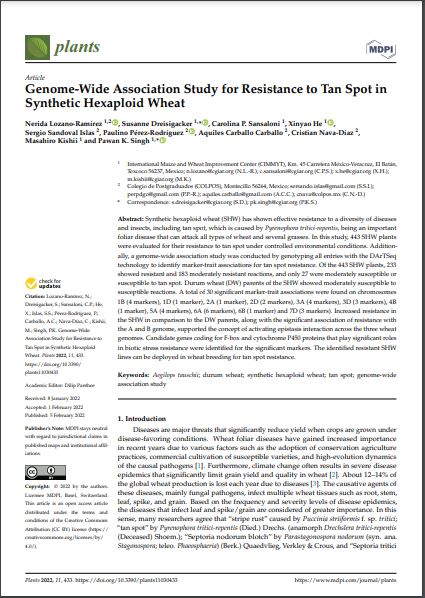 Synthetic hexaploid wheat (SHW) has shown effective resistance to a diversity of diseases and insects, including tan spot, which is caused by Pyrenophora tritici-repentis, being an important foliar disease that can attack all types of wheat and several grasses. In this study, 443 SHW plants were evaluated for their resistance to tan spot under controlled environmental conditions. Additionally, a genome-wide association study was conducted by genotyping all entries with the DArTSeq technology to identify marker-trait associations for tan spot resistance. Of the 443 SHW plants, 233 showed resistant and 183 moderately resistant reactions, and only 27 were moderately susceptible or susceptible to tan spot. Durum wheat (DW) parents of the SHW showed moderately susceptible to susceptible reactions. A total of 30 significant marker-trait associations were found on chromosomes 1B (4 markers), 1D (1 marker), 2A (1 marker), 2D (2 markers), 3A (4 markers), 3D (3 markers), 4B (1 marker), 5A (4 markers), 6A (6 markers), 6B (1 marker) and 7D (3 markers). In-creased resistance in the SHW in comparison to the DW parents, along with the significant association of resistance with the A and B genome, supported the concept of activating epistasis interaction across the three wheat genomes. Candidate genes coding for F-box and cytochrome P450 proteins that play significant roles in biotic stress resistance were identified for the significant markers. The identified resistant SHW lines can be deployed in wheat breeding for tan spot resistance.