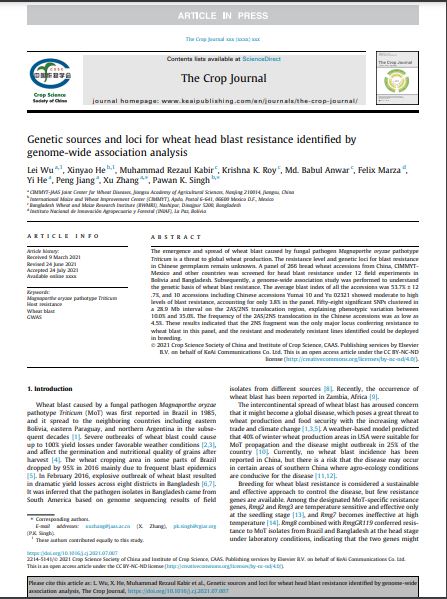 The emergence and spread of wheat blast caused by fungal pathogen Magnaporthe oryzae pathotype Triticum is a threat to global wheat production. The resistance level and genetic loci for blast resistance in Chinese germplasm remain unknown. A panel of 266 bread wheat accessions from China, CIMMYT-Mexico and other countries was screened for head blast resistance under 12 field experiments in Bolivia and Bangladesh. Subsequently, a genome-wide association study was performed to understand the genetic basis of wheat blast resistance. The average blast index of all the accessions was 53.7% ± 12.7%, and 10 accessions including Chinese accessions Yumai 10 and Yu 02321 showed moderate to high levels of blast resistance, accounting for only 3.8% in the panel. Fifty-eight significant SNPs clustered in a 28.9 Mb interval on the 2AS/2NS translocation region, explaining phenotypic variation between 10.0% and 35.0%. The frequency of the 2AS/2NS translocation in the Chinese accessions was as low as 4.5%. These results indicated that the 2NS fragment was the only major locus conferring resistance to wheat blast in this panel, and the resistant and moderately resistant lines identified could be deployed in breeding.