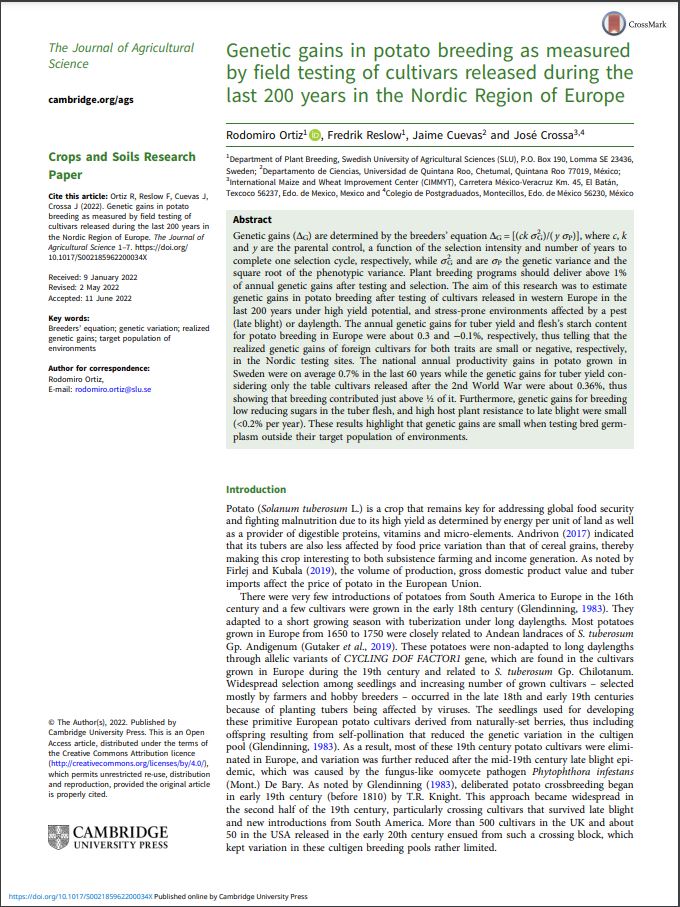 Genetic gains (ΔG) are determined by the breeders’ equation ΔG= [(ck σ2G)/(y σP)], where c, k and y are the parental control, a function of the selection intensity, and number of years to complete one selection cycle, respectively, while σ2Gand are σPthe genetic variance, and the square root of the phenotypic variance. Plant breeding programs should deliver above 1% of annual genetic gains after testing and selection. The aim of this research was to estimate genetic gains in potato breeding after testing of cultivars released in western Europe in the last 200 years under high yield potential, and stress-prone environments affected by a pest (late blight) or daylength. The annual genetic gains for tuber yield and flesh’s starch content for potato breeding in Europe were about 0.3% and -0.1%, respectively, thus telling that the realized genetic gains of foreign cultivars for both traits are small or negative, respectively, in the Nordic testing sites. The national annual productivity gains in potato grown in Sweden were on average 0.7% in the last 60 years while the genetic gains for tuber yield considering only the table cultivars released after the 2ndWorld War were about 0.36%, thus showing that breeding contributed just above 1/2 of it. Furthermore, genetic gains for breeding low reducing sugars in the tuber flesh, and high host plant resistance to late blight were small (< 0.2% per year). These results highlight that genetic gains are small when testing bred germplasm outside their target population of environments.