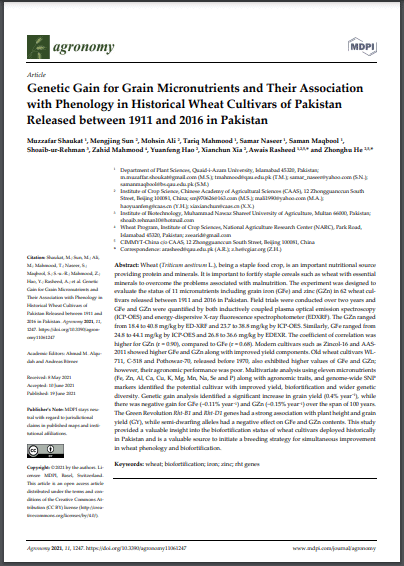 Wheat (Triticum aestivum L.), being a staple food crop, is an important nutritional source providing protein and minerals. It is important to fortify staple cereals such as wheat with essential minerals to overcome the problems associated with malnutrition. The experiment was designed to evaluate the status of 11 micronutrients including grain iron (GFe) and zinc (GZn) in 62 wheat cultivars released between 1911 and 2016 in Pakistan. Field trials were conducted over two years and GFe and GZn were quantified by both inductively coupled plasma optical emission spectroscopy (ICP-OES) and energy-dispersive X-ray fluorescence spectrophotometer (EDXRF). The GZn ranged from 18.4 to 40.8 mg/kg by ED-XRF and 23.7 to 38.8 mg/kg by ICP-OES. Similarly, GFe ranged from 24.8 to 44.1 mg/kg by ICP-OES and 26.8 to 36.6 mg/kg by EDEXR. The coefficient of correlation was higher for GZn (r = 0.90), compared to GFe (r = 0.68). Modern cultivars such as Zincol-16 and AAS-2011 showed higher GFe and GZn along with improved yield components. Old wheat cultivars WL-711, C-518 and Pothowar-70, released before 1970, also exhibited higher values of GFe and GZn; however, their agronomic performance was poor. Multivariate analysis using eleven micronutrients (Fe, Zn, Al, Ca, Cu, K, Mg, Mn, Na, Se and P) along with agronomic traits, and genome-wide SNP markers identified the potential cultivar with improved yield, biofortification and wider genetic diversity. Genetic gain analysis identified a significant increase in grain yield (0.4% year−1), while there was negative gain for GFe (−0.11% year−1) and GZn (−0.15% year−1) over the span of 100 years. The Green Revolution Rht-B1 and Rht-D1 genes had a strong association with plant height and grain yield (GY), while semi-dwarfing alleles had a negative effect on GFe and GZn contents. This study provided a valuable insight into the biofortification status of wheat cultivars deployed historically in Pakistan and is a valuable source to initiate a breeding strategy for simultaneous improvement in wheat phenology and biofortification.