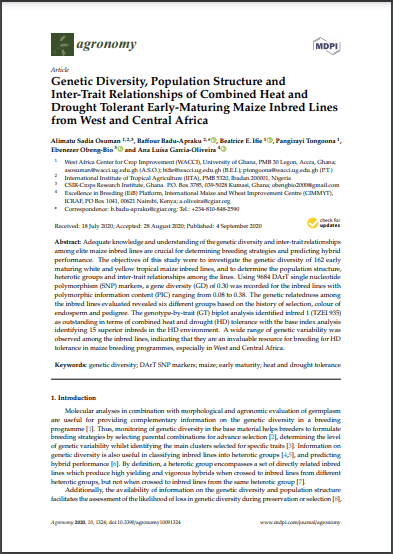 Adequate knowledge and understanding of the genetic diversity and inter-trait relationships among elite maize inbred lines are crucial for determining breeding strategies and predicting hybrid performance. The objectives of this study were to investigate the genetic diversity of 162 early maturing white and yellow tropical maize inbred lines, and to determine the population structure, heterotic groups and inter-trait relationships among the lines. Using 9684 DArT single nucleotide polymorphism (SNP) markers, a gene diversity (GD) of 0.30 was recorded for the inbred lines with polymorphic information content (PIC) ranging from 0.08 to 0.38. The genetic relatedness among the inbred lines evaluated revealed six different groups based on the history of selection, colour of endosperm and pedigree. The genotype-by-trait (GT) biplot analysis identified inbred 1 (TZEI 935) as outstanding in terms of combined heat and drought (HD) tolerance with the base index analysis identifying 15 superior inbreds in the HD environment. A wide range of genetic variability was observed among the inbred lines, indicating that they are an invaluable resource for breeding for HD tolerance in maize breeding programmes, especially in West and Central Africa.