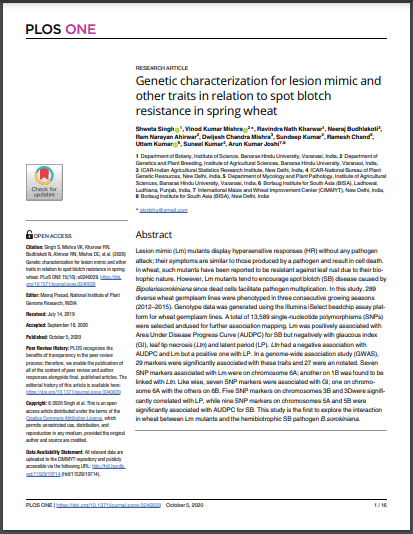 Lesion mimic (Lm) mutants display hypersensitive responses (HR) without any pathogen attack; their symptoms are similar to those produced by a pathogen and result in cell death. In wheat, such mutants have been reported to be resistant against leaf rust due to their biotrophic nature. However, Lm mutants tend to encourage spot blotch (SB) disease caused by Bipolarissorokiniana since dead cells facilitate pathogen multiplication. In this study, 289 diverse wheat germplasm lines were phenotyped in three consecutive growing seasons (2012–2015). Genotype data was generated using the Illumina iSelect beadchip assay platform for wheat germplasm lines. A total of 13,589 single-nucleotide polymorphisms (SNPs) were selected andused for further association mapping. Lm was positively associated with Area Under Disease Progress Curve (AUDPC) for SB but negatively with glaucous index (GI), leaf tip necrosis (Ltn) and latent period (LP). Ltn had a negative association with AUDPC and Lm but a positive one with LP. In a genome-wide association study (GWAS), 29 markers were significantly associated with these traits and 27 were an notated. Seven SNP markers associated with Lm were on chromosome 6A; another on 1B was found to be linked with Ltn. Like wise, seven SNP markers were associated with GI; one on chromosome 6A with the others on 6B. Five SNP markers on chromosomes 3B and 3Dwere significantly correlated with LP, while nine SNP markers on chromosomes 5A and 5B were significantly associated with AUDPC for SB. This study is the first to explore the interaction in wheat between Lm mutants and the hemibiotrophic SB pathogen B.sorokiniana.