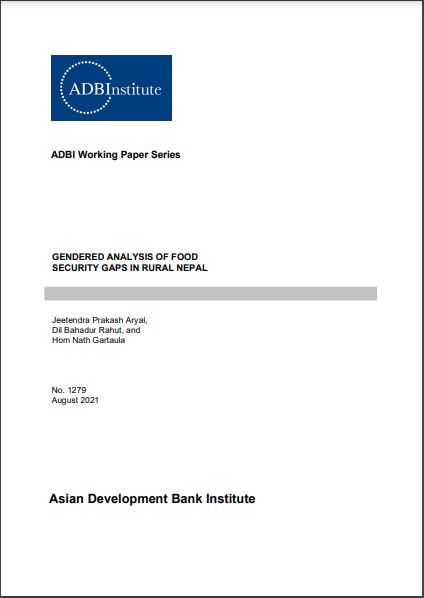 Gender studies on food security have often focused on the differences between male-headed households (MHHs) and female-headed households (FHHs). Hence, they have mostly ignored the possibility of food security gaps between the different types of FHHs, treating them as homogeneous. Therefore, using nationally representative data from Nepal and applying exogenous switching treatment effect regression models, this study investigated whether food security differences exist between de facto FHHs (i.e., households managed by a woman whose husband is physically not present at home owing to work outside) and de jure FHHs (i.e., households managed by a single, widowed, or divorced woman). Contrary to the general hypothesis, this study did not find any significant difference in the food security status between MHHs and FHHs. Nevertheless, it found that food security is significantly lower among de jure FHHs than among MHHs. More surprising, considering the common belief, is that the food security difference between de facto FHHs and de jure FHHs is larger than the difference between de jure FHHs and MHHs. It is possible to explain these gaps between MHHs and de jure FHHs by unobserved heterogeneity effects but not by treatment effects, while both treatment effects (i.e., differences in returns to their assets, such as participation in off-farm income) and unobserved heterogeneity effects explain the differences between de facto and de jure FHHs. The results have important policy implications, primarily because they reject the general notion that FHHs are less food secure, and strongly recommend a deeper investigation into the heterogeneity among FHHs. This has a crucial implication for designing government policy related to two important Sustainable Development Goals—gender equality and food security.