Ensuring nutritional security in India through wheat biofortification: A review 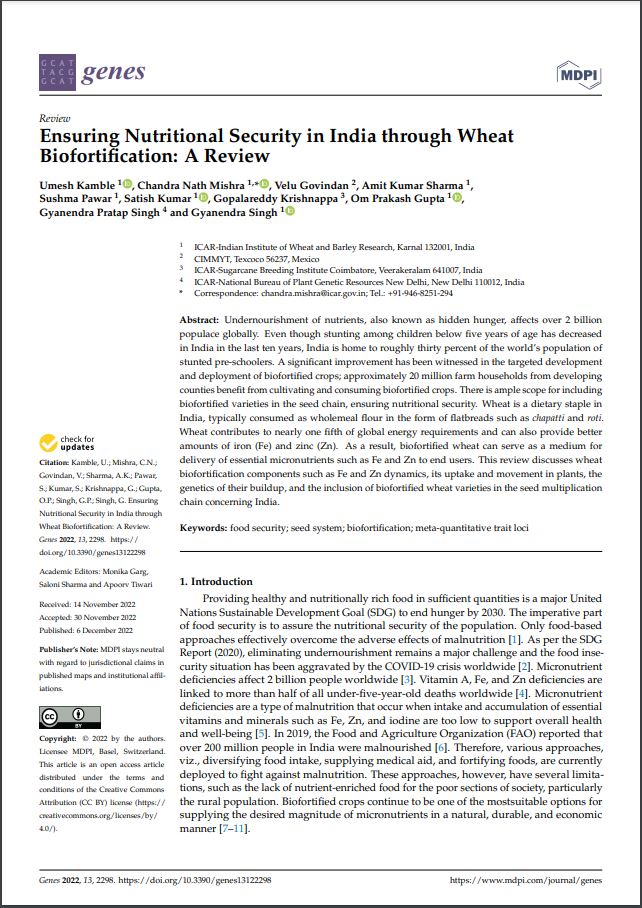 Undernourishment of nutrients, also known as hidden hunger, affects over 2 billion populace globally. Even though stunting among children below five years of age has decreased in India in the last ten years, India is home to roughly thirty percent of the world’s population of stunted pre-schoolers. A significant improvement has been witnessed in the targeted development and deployment of biofortified crops; approximately 20 million farm households from developing counties benefit from cultivating and consuming biofortified crops. There is ample scope for including biofortified varieties in the seed chain, ensuring nutritional security. Wheat is a dietary staple in India, typically consumed as wholemeal flour in the form of flatbreads such as chapatti and roti. Wheat contributes to nearly one fifth of global energy requirements and can also provide better amounts of iron (Fe) and zinc (Zn). As a result, biofortified wheat can serve as a medium for delivery of essential micronutrients such as Fe and Zn to end users. This review discusses wheat biofortification components such as Fe and Zn dynamics, its uptake and movement in plants, the genetics of their buildup, and the inclusion of biofortified wheat varieties in the seed multiplication chain concerning India.