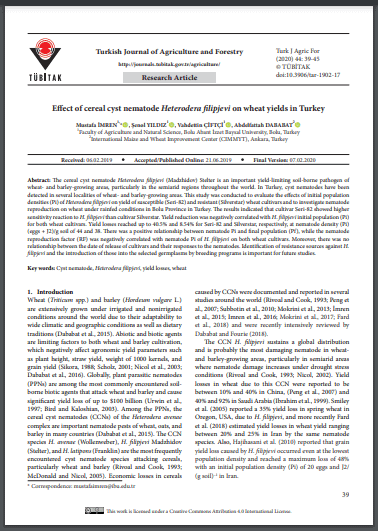 The cereal cyst nematode Heterodera filipjevi (Madzhidov) Stelter is an important yield-limiting soil-borne pathogen of wheat- and barley-growing areas, particularly in the semiarid regions throughout the world. In Turkey, cyst nematodes have been detected in several localities of wheat- and barley-growing areas. This study was conducted to evaluate the effects of initial population densities (Pi) of Heterodera filipjevi on yield of susceptible (Seri-82) and resistant (Silverstar) wheat cultivars and to investigate nematode reproduction on wheat under rainfed conditions in Bolu Province in Turkey. The results indicated that cultivar Seri-82 showed higher sensitivity reaction to H. filipjevi than cultivar Silverstar. Yield reduction was negatively correlated with H. filipjevi initial population (Pi) for both wheat cultivars. Yield losses reached up to 40.5% and 8.54% for Seri-82 and Silverstar, respectively, at nematode density (Pi) (eggs + J2)/g soil of 44 and 38. There was a positive relationship between nematode Pi and final population (Pf), while the nematode reproduction factor (RF) was negatively correlated with nematode Pi of H. filipjevi on both wheat cultivars. Moreover, there was no relationship between the date of release of cultivars and their responses to the nematodes. Identification of resistance sources against H. filipjevi and the introduction of those into the selected germplasms by breeding programs is important for future studies.