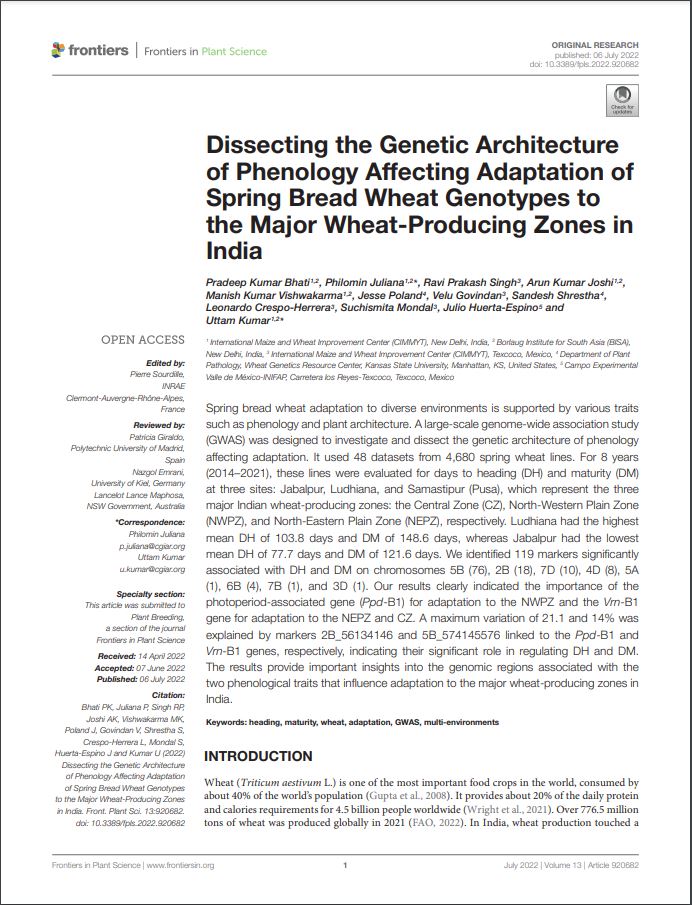 Spring bread wheat adaptation to diverse environments is supported by various traits such as phenology and plant architecture. A large-scale genome-wide association study (GWAS) was designed to investigate and dissect the genetic architecture of phenology affecting adaptation. It used 48 datasets from 4,680 spring wheat lines. For 8 years (2014–2021), these lines were evaluated for days to heading (DH) and maturity (DM) at three sites: Jabalpur, Ludhiana, and Samastipur (Pusa), which represent the three major Indian wheat-producing zones: the Central Zone (CZ), North-Western Plain Zone (NWPZ), and North-Eastern Plain Zone (NEPZ), respectively. Ludhiana had the highest mean DH of 103.8 days and DM of 148.6 days, whereas Jabalpur had the lowest mean DH of 77.7 days and DM of 121.6 days. We identified 119 markers significantly associated with DH and DM on chromosomes 5B (76), 2B (18), 7D (10), 4D (8), 5A (1), 6B (4), 7B (1), and 3D (1). Our results clearly indicated the importance of the photoperiod-associated gene (Ppd-B1) for adaptation to the NWPZ and the Vrn-B1 gene for adaptation to the NEPZ and CZ. A maximum variation of 21.1 and 14% was explained by markers 2B_56134146 and 5B_574145576 linked to the Ppd-B1 and Vrn-B1 genes, respectively, indicating their significant role in regulating DH and DM. The results provide important insights into the genomic regions associated with the two phenological traits that influence adaptation to the major wheat-producing zones in India.