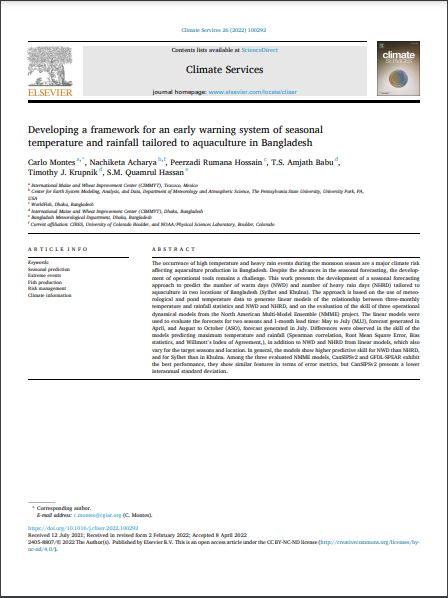 The occurrence of high temperature and heavy rain events during the monsoon season are a major climate risk affecting aquaculture production in Bangladesh. Despite the advances in the seasonal forecasting, the development of operational tools remains a challenge. This work presents the development of a seasonal forecasting approach to predict the number of warm days (NWD) and number of heavy rain days (NHRD) tailored to aquaculture in two locations of Bangladesh (Sylhet and Khulna). The approach is based on the use of meteorological and pond temperature data to generate linear models of the relationship between three-monthly temperature and rainfall statistics and NWD and NHRD, and on the evaluation of the skill of three operational dynamical models from the North American Multi-Model Ensemble (NMME) project. The linear models were used to evaluate the forecasts for two seasons and 1-month lead time: May to July (MJJ), forecast generated in April, and August to October (ASO), forecast generated in July. Differences were observed in the skill of the models predicting maximum temperature and rainfall (Spearman correlation, Root Mean Square Error, Bias statistics, and Willmott’s Index of Agreement,), in addition to NWD and NHRD from linear models, which also vary for the target seasons and location. In general, the models show higher predictive skill for NWD than NHRD, and for Sylhet than in Khulna. Among the three evaluated NMME models, CanSIPSv2 and GFDL-SPEAR exhibit the best performance, they show similar features in terms of error metrics, but CanSIPSv2 presents a lower interannual standard deviation.