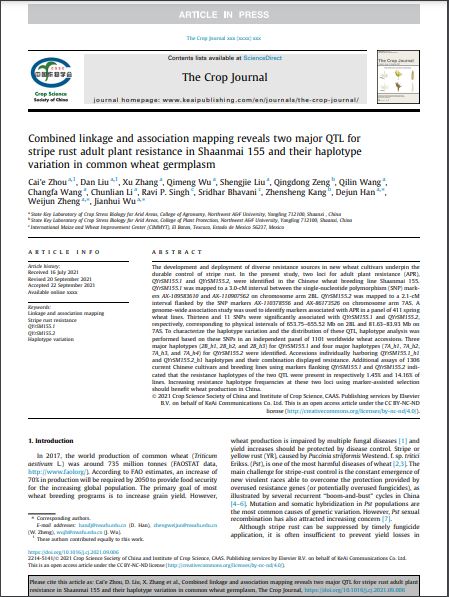 The development and deployment of diverse resistance sources in new wheat cultivars underpin the durable control of stripe rust. In the present study, two loci for adult plant resistance (APR), QYrSM155.1 and QYrSM155.2, were identified in the Chinese wheat breeding line Shaanmai 155. QYrSM155.1 was mapped to a 3.0-cM interval between the single-nucleotide polymorphism (SNP) markers AX-109583610 and AX-110907562 on chromosome arm 2BL. QYrSM155.2 was mapped to a 2.1-cM interval flanked by the SNP markers AX-110378556 and AX-86173526 on chromosome arm 7AS. A genome-wide association study was used to identify markers associated with APR in a panel of 411 spring wheat lines. Thirteen and 11 SNPs were significantly associated with QYrSM155.1 and QYrSM155.2, respectively, corresponding to physical intervals of 653.75–655.52 Mb on 2BL and 81.63–83.93 Mb on 7AS. To characterize the haplotype variation and the distribution of these QTL, haplotype analysis was performed based on these SNPs in an independent panel of 1101 worldwide wheat accessions. Three major haplotypes (2B_h1, 2B_h2, and 2B_h3) for QYrSM155.1 and four major haplotypes (7A_h1, 7A_h2, 7A_h3, and 7A_h4) for QYrSM155.2 were identified. Accessions individually harboring QYrSM155.1_h1 and QYrSM155.2_h1 haplotypes and their combination displayed resistance. Additional assays of 1306 current Chinese cultivars and breeding lines using markers flanking QYrSM155.1 and QYrSM155.2 indicated that the resistance haplotypes of the two QTL were present in respectively 1.45% and 14.16% of lines. Increasing resistance haplotype frequencies at these two loci using marker-assisted selection should benefit wheat production in China.