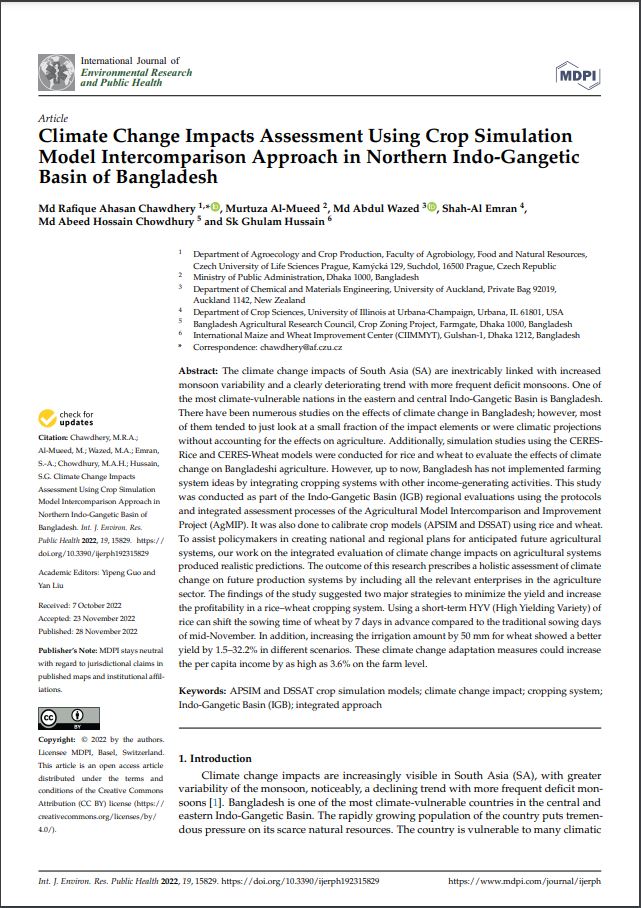 The climate change impacts of South Asia (SA) are inextricably linked with increased monsoon variability and a clearly deteriorating trend with more frequent deficit monsoons. One of the most climate-vulnerable nations in the eastern and central Indo-Gangetic Basin is Bangladesh. There have been numerous studies on the effects of climate change in Bangladesh; however, most of them tended to just look at a small fraction of the impact elements or were climatic projections without accounting for the effects on agriculture. Additionally, simulation studies using the CERES-Rice and CERES-Wheat models were conducted for rice and wheat to evaluate the effects of climate change on Bangladeshi agriculture. However, up to now, Bangladesh has not implemented farming system ideas by integrating cropping systems with other income-generating activities. This study was conducted as part of the Indo-Gangetic Basin (IGB) regional evaluations using the protocols and integrated assessment processes of the Agricultural Model Intercomparison and Improvement Project (AgMIP). It was also done to calibrate crop models (APSIM and DSSAT) using rice and wheat. To assist policymakers in creating national and regional plans for anticipated future agricultural systems, our work on the integrated evaluation of climate change impacts on agricultural systems produced realistic predictions. The outcome of this research prescribes a holistic assessment of climate change on future production systems by including all the relevant enterprises in the agriculture sector. The findings of the study suggested two major strategies to minimize the yield and increase the profitability in a rice–wheat cropping system. Using a short-term HYV (High Yielding Variety) of rice can shift the sowing time of wheat by 7 days in advance compared to the traditional sowing days of mid-November. In addition, increasing the irrigation amount by 50 mm for wheat showed a better yield by 1.5–32.2% in different scenarios. These climate change adaptation measures could increase the per capita income by as high as 3.6% on the farm level.