Clean energy choice and use by the urban households in India: implications for sustainable energy for all 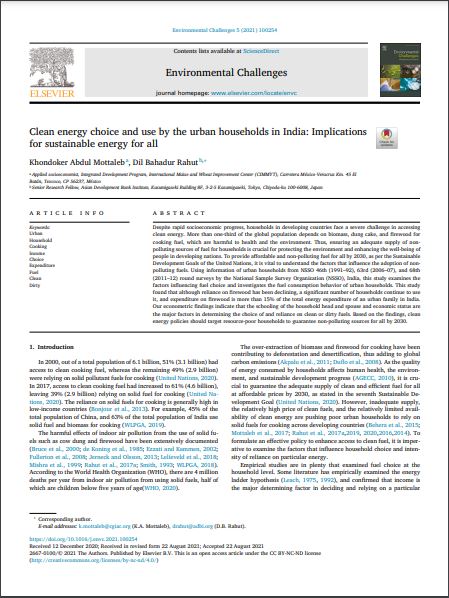 Despite rapid socioeconomic progress, households in developing countries face a severe challenge in accessing clean energy. More than one-third of the global population depends on biomass, dung cake, and firewood for cooking fuel, which are harmful to health and the environment. Thus, ensuring an adequate supply of non-polluting sources of fuel for households is crucial for protecting the environment and enhancing the well-being of people in developing nations. To provide affordable and non-polluting fuel for all by 2030, as per the Sustainable Development Goals of the United Nations, it is vital to understand the factors that influence the adoption of non-polluting fuels. Using information of urban households from NSSO 46th (1991–92), 63rd (2006–07), and 68th (2011–12) round surveys by the National Sample Survey Organization (NSSO), India, this study examines the factors influencing fuel choice and investigates the fuel consumption behavior of urban households. This study found that although reliance on firewood has been declining, a significant number of households continue to use it, and expenditure on firewood is more than 15% of the total energy expenditure of an urban family in India. Our econometric findings indicate that the schooling of the household head and spouse and economic status are the major factors in determining the choice of and reliance on clean or dirty fuels. Based on the findings, clean energy policies should target resource-poor households to guarantee non-polluting sources for all by 2030.