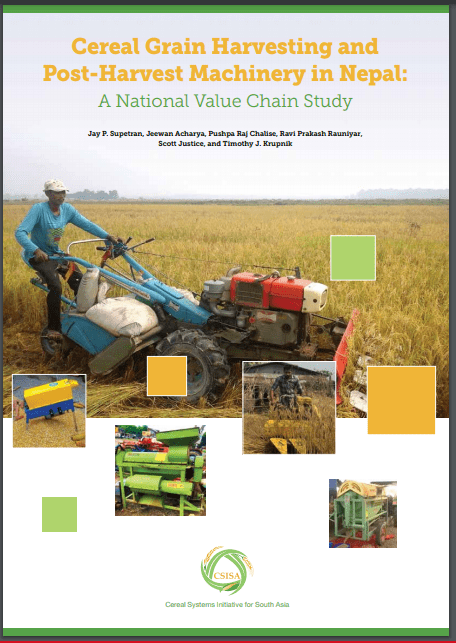 In the plains area of Nepal’s Terai and in larger valleys in the hills, many parts of rice and wheat grain production process are nearly 100% mechanized. The second half of wheat and rice harvesting –– threshing and cleaning –– was mechanized as early as the 1960s. By the mid-1990s nearly 100% of wheat in the Terai was being threshed mostly by stand-alone threshers that were powered by 5-8 horsepower (HP) diesel pumpset engines.

However, one of the main parts of the production process, the field harvesting of grain, is still not yet fully mechanized even though it is has one of the largest labor requirements. Grain harvesting machinery entered Nepal from India in the late 1990s with the introduction of large 90+ horsepower self-propelled combines in central Terai (Parasi, Rupandehi and Kapilvastu Districts), mainly for wheat. Machines for rice harvesting were introduced in the Western Terai by the 2010s.

In the last decade, the types and numbers of powered or mechanized harvest technologies in Nepal has greatly increased in size. With advent of many new machines from China and elsewhere, the market for grain harvest machinery has become very dynamic. Nevertheless, various bottlenecks limit access and usage far below demand.

A new study by researchers from the Cereal Systems Initiative for South Asia (CSISA), a project led by the International Maize and Wheat Improvement Center (CIMMYT), provides the results of a study on the value chains of rice, wheat and maize harvesting equipment that are used in Nepal by farmers and service providers. It documents the movement of the various new technologies into the value chain, characterizing the whole harvesting machinery market.

The study also provides a detailed value chain map of the various reaper-harvesters, threshers, shellers and combine harvesters that are now widely available for sale in Nepal with the overall goal of providing recommendations for policy makers and development agencies to promote greater access to and usage of such machinery.