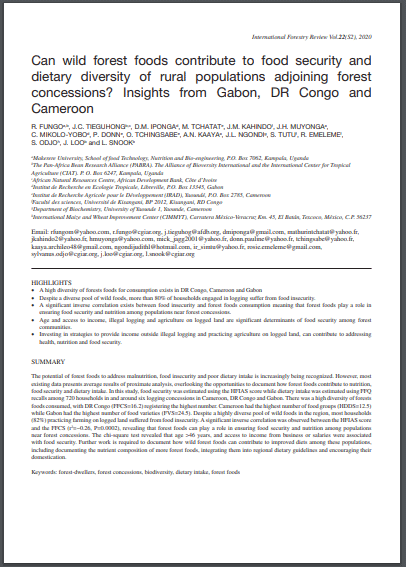 The potential of forest foods to address malnutrition, food insecurity and poor dietary intake is increasingly being recognized. However, most existing data presents average results of proximate analysis, overlooking the opportunities to document how forest foods contribute to nutrition, food security and dietary intake. In this study, food security was estimated using the HFIAS score while dietary intake was estimated using FFQ recalls among 720 households in and around six logging concessions in Cameroon, DR Congo and Gabon. There was a high diversity of forests foods consumed, with DR Congo (FFCS=16.2) registering the highest number. Cameroon had the highest number of food groups (HDDS=12.5) while Gabon had the highest number of food varieties (FVS=24.5). Despite a highly diverse pool of wild foods in the region, households 87% of suffered from food insecurity. A significant inverse correlation was observed between the HFIAS score and the FFCS (r2 =−0.26, P=0.0002), revealing that forest foods can play a role in ensuring food security and nutrition among populations near forest concessions. The chi-square test revealed that age >46 years, and business ownership were associated with food security. Further work is required to document how wild forest foods can contribute to improved diets among these populations, including documenting the nutrient composition of more forest foods, integrating them into regional dietary guidelines and encouraging their domestication.