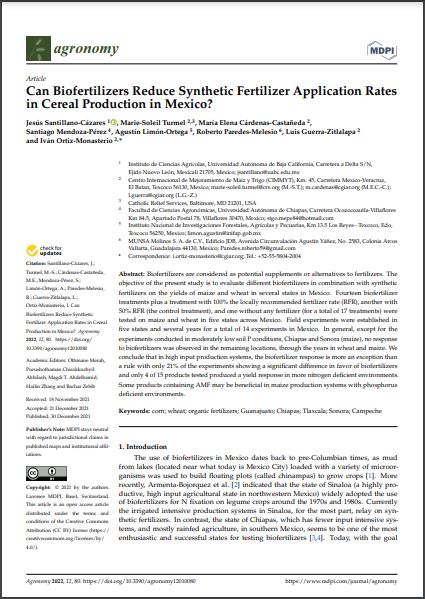 Biofertilizers are considered as potential supplements or alternatives to fertilizers. The objective of the present study is to evaluate different biofertilizers in combination with synthetic fertilizers on the yields of maize and wheat in several states in Mexico. Fourteen biofertilizer treatments plus a treatment with 100% the locally recommended fertilizer rate (RFR), another with 50% RFR (the control treatment), and one without any fertilizer (for a total of 17 treatments) were tested on maize and wheat in five states across Mexico. Field experiments were established in five states and several years for a total of 14 experiments in Mexico. In general, except for the experiments conducted in moderately low soil P conditions, Chiapas and Sonora (maize), no response to biofertilizers was observed in the remaining locations, through the years in wheat and maize. We conclude that in high input production systems, the biofertilizer response is more an exception than a rule with only 21% of the experiments showing a significant difference in favor of biofertilizers and only 4 of 15 products tested produced a yield response in more nitrogen deficient environments. Some products containing AMF may be beneficial in maize production systems with phosphorus deficient environments.