Analysis of past and projected trends of rainfall and temperature parameters in Eastern and Western Hararghe zones, Ethiopia 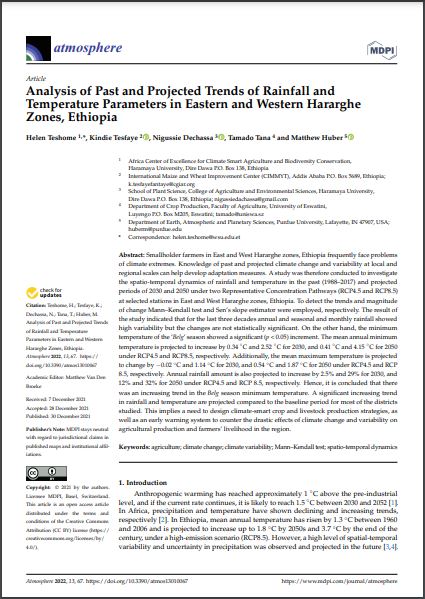 Smallholder farmers in East and West Hararghe zones, Ethiopia frequently face problems of climate extremes. Knowledge of past and projected climate change and variability at local and regional scales can help develop adaptation measures. A study was therefore conducted to inves-tigate the spatio‐temporal dynamics of rainfall and temperature in the past (1988–2017) and projected periods of 2030 and 2050 under two Representative Concentration Pathways (RCP4.5 and RCP8.5) at selected stations in East and West HarargPhe zones, Ethiopia. To detect the trends and magnitude of change Mann–Kendall test and Sen’s slope estimator were employed, respectively. The result of the study indicated that for the last three decades annual and seasonal and monthly rainfall showed high variability but the changes are not statistically significant. On the other hand, the minimum temperature of the ‘Belg’ season showed a significant (p < 0.05) increment. The mean annual minimum temperature is projected to increase by 0.34 °C and 2.52 °C for 2030, and 0.41 °C and 4.15 °C for 2050 under RCP4.5 and RCP8.5, respectively. Additionally, the mean maximum temperature is projected to change by −0.02 °C and 1.14 °C for 2030, and 0.54 °C and 1.87 °C for 2050 under RCP4.5 and RCP 8.5, respectively. Annual rainfall amount is also projected to increase by 2.5% and 29% for 2030, and 12% and 32% for 2050 under RCP4.5 and RCP 8.5, respectively. Hence, it is concluded that there was an increasing trend in the Belg season minimum temperature. A significant increasing trend in rainfall and temperature are projected compared to the baseline period for most of the districts studied. This implies a need to design climate‐smart crop and live-stock production strategies, as well as an early warning system to counter the drastic effects of climate change and variability on agricultural production and farmers’ livelihood in the region.