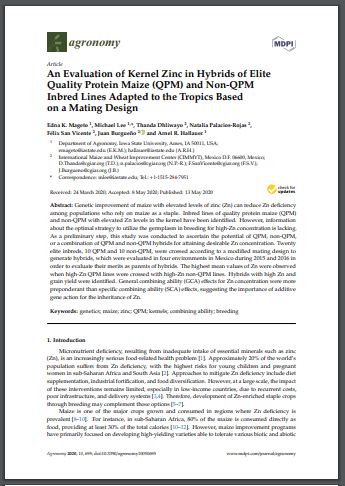 Genetic improvement of maize with elevated levels of zinc (Zn) can reduce Zn deficiency among populations who rely on maize as a staple. Inbred lines of quality protein maize (QPM) and non-QPM with elevated Zn levels in the kernel have been identified. However, information about the optimal strategy to utilize the germplasm in breeding for high-Zn concentration is lacking. As a preliminary step, this study was conducted to ascertain the potential of QPM, non-QPM, or a combination of QPM and non-QPM hybrids for attaining desirable Zn concentration. Twenty elite inbreds, 10 QPM and 10 non-QPM, were crossed according to a modified mating design to generate hybrids, which were evaluated in four environments in Mexico during 2015 and 2016 in order to evaluate their merits as parents of hybrids. The highest mean values of Zn were observed when high-Zn QPM lines were crossed with high-Zn non-QPM lines. Hybrids with high Zn and grain yield were identified. General combining ability (GCA) effects for Zn concentration were more preponderant than specific combining ability (SCA) effects, suggesting the importance of additive gene action for the inheritance of Zn.