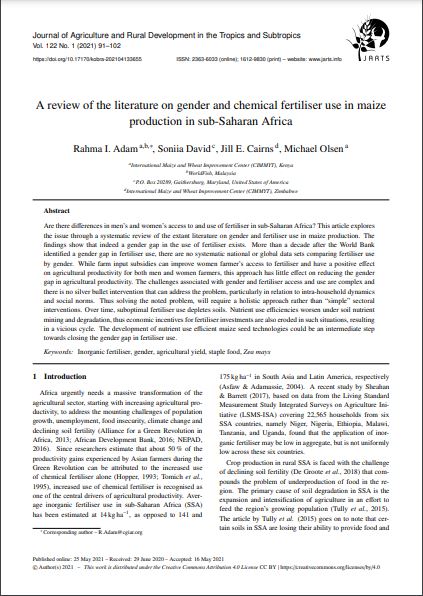 Are there differences in men’s and women’s access to and use of fertiliser in sub-Saharan Africa? This article explores the issue through a systematic review of the extant literature on gender and fertiliser use in maize production. The findings show that indeed a gender gap in the use of fertiliser exists. More than a decade after the World Bank identified a gender gap in fertiliser use, there are no systematic national or global data sets comparing fertiliser use by gender. While farm input subsidies can improve women farmer’s access to fertiliser and have a positive effect on agricultural productivity for both men and women farmers, this approach has little effect on reducing the gender gap in agricultural productivity. The challenges associated with gender and fertiliser access and use are complex and there is no silver bullet intervention that can address the problem, particularly in relation to intra-household dynamics and social norms. Thus solving the noted problem, will require a holistic approach rather than “simple” sectoral interventions. Over time, suboptimal fertiliser use depletes soils. Nutrient use efficiencies worsen under soil nutrient mining and degradation, thus economic incentives for fertiliser investments are also eroded in such situations, resulting in a vicious cycle. The development of nutrient use efficient maize seed technologies could be an intermediate step towards closing the gender gap in fertiliser use.