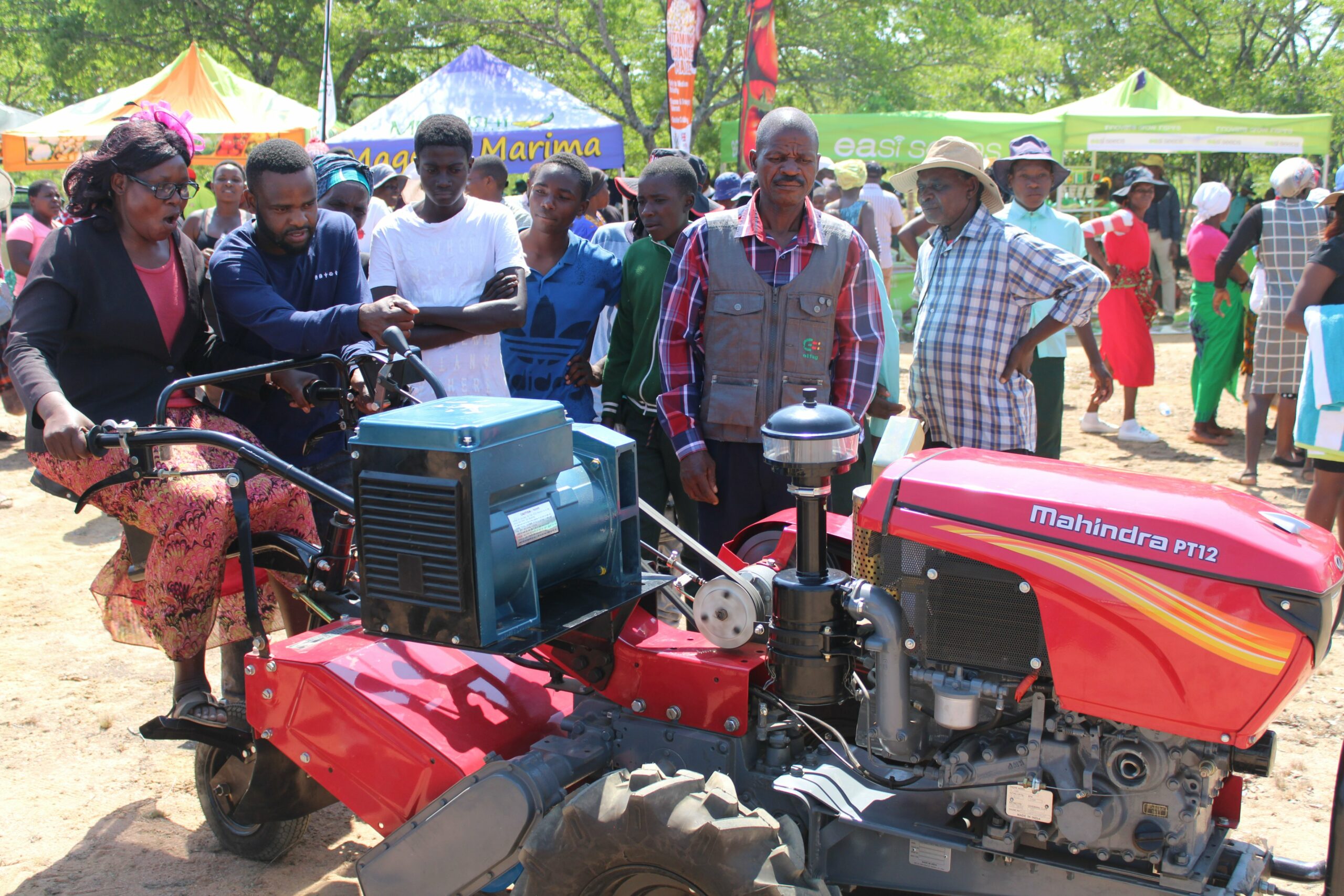 The two-wheel tractor has been a life changer for Ranganai Muzorori.

At a recent seed and mechanization fair in Zimbabwe, the maize farmer, who purchased the tractor on a lease-to-own basis, said he now enjoys bigger earnings.

Not only has he realized a significant change in his income due to the tractor, he no longer has to struggle to shell maize because he now has access to a machine that strips the corn off the cob.

In a day I can shell about 10 tons, which is helpful for saving precious time, Muzorori said.

Land preparation is also less arduous. “We no longer rely on animal draft power or our own manual labor, but the tractor,” he added.

Due to the versatility of the tractor, which has multiple attachments depending on the task that needs to be done, he has also secured a formal annual contract with Great Zimbabwe Hotel in the southeastern city of Masvingo. He attaches a trailer to the tractor to collect garbage and transport it to the dump, diversifying his income beyond conventional on-farm earnings.

Before the International Maize and Wheat Improvement Center (CIMMYT), in partnership with Zimbabwe’s government extension arm Agritex (Department of Agricultural, Technical and Extension Services), introduced low-cost tractors and small engine-operated farm machinery, such innovations were just a dream for many farmers in Zimbabwe who could not afford to pay $30,000 USD.

“We need to move with the times, the days of relying on either draft power or manual labor should be a thing of the past,” said Caleb Mnkandla, an Agritex supervisor. “With more exposure forums for farmers like this, we can accelerate the adoption of mechanized agriculture even at a smallholder farmer level.”

A recent surge of January and tickborne diseases, which affect livestock, added to difficulties faced by many communal farmers due to draft-power shortages during land preparation and planting seasons.

This has translated to reduced yields for many farmers as the timing and efficiency of land preparation and planting has a direct impact on crop yields.

Other farmers in Masvingo are also seeing the transformative capabilities of such mechanization, as reflected in testimonials during the R4 Rural Resilience and ZAMBUKO seed and mechanization fair held in October.

The project – funded by the United States Agency for International Development (USAID), the Swiss Agency for Development and Cooperation (SDC), and the World Food Programme (WFP) – is intended to reduce the arduous manual labor associated with the use of hand operated ploughs and tools.

“Smallholder production systems in Africa have been heavily comprised of intense drudgery which makes farming less attractive for youth and difficult for women,” said Abdul Matin, a lead scientist with CIMMYT.  “The new mechanization technologies we are bringing in are meant to reduce drudgery and cost, and add increased efficiencies to smallholder farmer operations.”

In a joint collaboration, Agritex and CIMMYT provide an innovative financial scheme under which service providers pay a commitment fee of $500 USD to access the machinery. They then receive a grace period of four months and pay instalments of $100 USD a month for 20 months. The project covers half of the machinery cost as risk sharing.

So far, there are 34 service providers participating in Masvingo, offering mechanization services to smallholder farming communities for a fee. The project is a scalable pilot for the rest of the country.

The service provider model puts the focus on the asset owners, who not only enjoy the benefits of the mechanization, but also offer services to surrounding farming communities which causes exponential impact, Matin said.

The package of services farmers have been accessing include tillage, transportation, shelling and threshing services.

Tractors can be used for transportation year round, providing steady income for service providers.

The fair provides a platform to demonstrate and showcase the impact of the new technology to farmers, said Pamela Chirwa, project coordinator for CIMMYT’s Global Maize Program in the Southern Africa Regional Office located in Zimbabwe, who coordinated the event.

“We need to continuously expose farmers to other farmers who have moved on to mechanized production,” she said. “Such farmer-to-farmer extension makes it easier for others to adopt technology as they relate to each other better.”