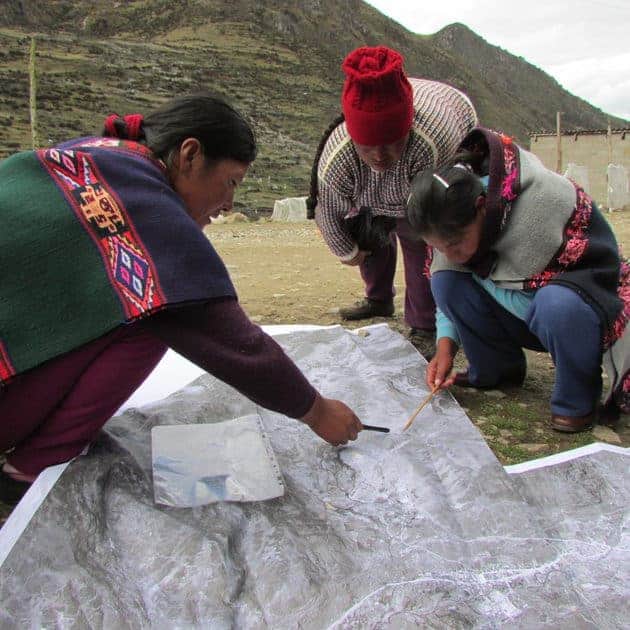 A detailed survey of mountain communities in Peru has revealed that farmers are adjusting to the pressures of climate change and population growth in complex ways that take full advantage of the adaptability of their main crop, the potato. Nevertheless, researchers warn that “the plasticity shown by the potato and the adaptability of smallholder cultivation systems do not necessarily confer them resilience into the future”. Many landraces are extremely scarce, and important diversity is threatened as it is pushed higher up the slopes, where agriculture confronts extreme abiotic stresses such as hails and frosts.

The research, implemented as part of the CGIAR Research Program on Roots, Tubers and Bananas (RTB), was recently published in the journal Land. A key conclusion, according to lead author Alejandra Arce, Associate Scientist – Andean Agrobiodiversity at the International Potato Center (CIP), is that subsistence and market production co-exist in these smallholder systems in what the paper calls “hybrid agricultural landscapes”. As a result, she says, “commercial production does not have to contradict agrobiodiversity conservation in the future”. However, maintaining potato diversity will require “innovations that motivate young Andean farmers and generate an income that is commensurate with the art, knowledge and hard work that goes into high-altitude small-scale farming.”

The highlands of central Peru are not an easy place to grow food. Microclimates and soils vary across small distances and, especially, with altitude. Frost and hail often result in crop failure, although their impact can be highly localized. Pests and diseases constitute additional challenges. Climate change affects the frequency of frosts and other disruptive weather events more generally.

Farmers respond with a suite of defensive tactics, many of which draw upon the vast genetic diversity of potatoes. Farmers grow — and appreciate as an important part of their diet — hundreds of different floury landraces of the common cultivated potato, Solanum tuberosum, with some households growing up to 160 unique types. They also grow so-called bitter potatoesany fields are planted with a mixture of species and varieties, which makes harvests more resilient. The different species and varieties also serve different purposes. The vast majority of S. tuberosum landraces are grown as mixtures for domestic consumption. A few modern varieties, derived from formal breeding, are grown on their own, primarily for sale. The bitter types are more frost-resistant and are converted into chuño by a form of freeze-drying.

The researchers set out to understand how farmers make use of the land at their disposal and to document the conservation status of the various kinds of potatoes in five communities from two different regions. In Huancavelica region, potato is grown at high altitude where frost and hail are common. Pasco, about 235 km away, is a valley where high humidity means that the main threat is from potato late blight disease (Phytophthora infestans). The survey covered 176 households in Huancavelica and 147 in Pasco, managing 481 and 620 fields respectively.

The survey revealed many differences between Huancavelica and Pasco and some important similarities. In both places, farmers have adapted their ‘traditional’ practices to intensify production. For example, although there is a lot of overlap, they grow bred cultivars at the lowest elevations, to produce a good cash crop for market. Mixed fields of floury landraces occupy the middle zone, mostly to feed the family. At the highest elevations, frost-resistant bitter potatoes join the mix, especially in Huancavelica.

There are differences too. In Pasco, farmers shortened the fallow period in their more productive, lower fields and bought inputs to increase the productivity of bred potatoes for sale. At the same time, they maintained a longer fallow period in the higher fields, conserving the diversity that confers resilience on the system. Farmers in Huancavelica have twice as many children and one third the land of those in Pasco, effectively forcing them to shorten fallows in all fields and expand cultivation upwards. Much less of the land in Huancavelica is part of a communal fallowing system, 33.5% compared to 92.1% in Pasco, where communal practices are being maintained despite increased intensification.

However, although farmers are growing more bred cultivars for market, they are not abandoning their traditional varieties; instead, and in response to higher temperatures and pressure from pests and diseases, they have moved them up the slopes.

In need of support

Comparing contemporary information with data gathered by genebank collectors from 1975 to 1985 showed that on average floury landraces were now being grown about 300 meters higher than they were 30 years ago, with bitter types 100 meters higher. As a result of farmers’ responses to climate change, most of the potato’s genetic diversity is now concentrated between 3900 and 4200 meters above sea level; although not abandoned, much of that diversity is fragile.

Each floury landrace is grown by relatively few farmers, with roughly a third of them restricted to fewer than 1% of the households. Any kind of accident could extinguish the variety in that community, reducing overall resilience.

Bitter landraces are an even greater concern. They are much less diverse than floury landraces and most farmers are growing them less, for several reasons. The labor needed to make chuño has become scarcer, the necessary June frosts are more unpredictable, and consumer preferences are changing. “Clearly,” the paper reports, “bitter landraces are at risk of being lost.”

Stef de Haan, an Andean Food Systems Researcher at CIP, who supervised the research, points out that apart from frost resistance, the bitter species are also resistant to pests such as Andean potato weevils (Premnotrypes spp.). “Their genetic potential is key to future breeding strategies to cope with abiotic stressors,” de Haan says.