Youth Transitions in the drylands: gendered rights in land access and control 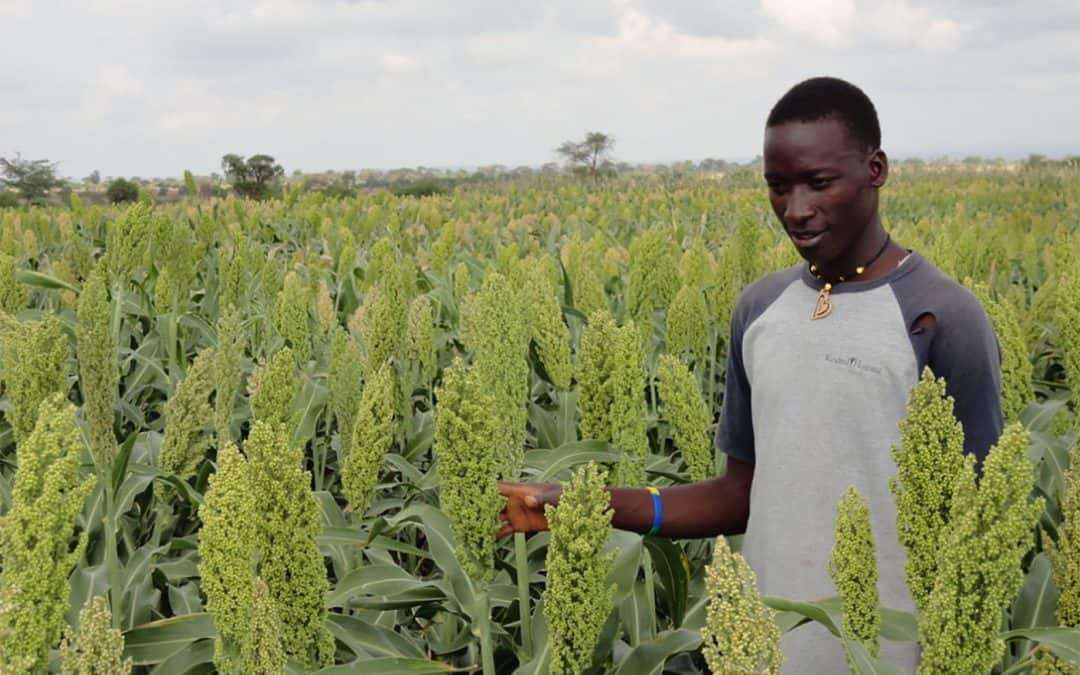 In 2019, the CGIAR Research Program on Grain Legumes and Dryland Cereals (CRP-GLDC) initiated a study to understand ‘youth realities, youth aspirations and youth opportunity structures’ in the drylands of East Africa[1] for a background paper to support the designing of a CRP-GLDC youth strategy.  One of the issues coming out as a strong area of focus is the aspect of ‘youth transition’ and how this gendered process is leading to different realities for boys and girls in the rural dryland areas.  The standard path/pipeline for transition from the childhood to adulthood stages is the ‘education program or systems’ where children go through pre-primary primary and secondary schools, colleges and universities, and then enter the job market either as employees or entrepreneurs at an age of about 24-25 years.  This is often the ideal pipeline.  Nevertheless, ‘leaks’ do happen along this pipeline: some children never get into this pipeline while those that do, keep dropping off at different points due to various factors.

Communities have varied definitions and cultural guides of how the transitions happen and for who.  The global definitions of youth based on age, although is a good compromising indicator, is not always applicable in the cultural settings when defining the ‘youth’.  What we are seeing is that the ‘boy child’ get to be youth and stay defined as youth for longer periods than the ‘girl child’.  And one of the biggest determinants is a) if a girl gets a child and b). how they got the child.  If they got the child in a culturally acceptable process that maybe led to marriage, then this process leads to a unique path of acceptance and ‘access and control of resources’.  When a girl gets a child out of wedlock in a way that is deemed culturally unacceptable/unappreciated, then this becomes the beginning of an era of exclusions and missing out on life improving opportunities such as further education, and productive resources, especially land.

Land is an essential resource in all countries as a basis for production and income generation for a vast majority of rural communities.  It is on land that most livelihood options are anchored.  How access to land plays out for the boy child in transition and for the girl child in transition is a big factor in terms of how successful they maybe in food and income production.  Some of the common pathway for boys accessing and controlling land is through inheritance.  When a boy is of age, the parents will share the land (sometimes other assets like livestock).  They will encourage him to build a house and a take a wife.  He will assume access to the land he has been given and can produce a crop on it.  After a while, he could have total control on the land and he can make full decisions about what happens to the land. In Ethiopia access to land is one of the most important markers of transition to adolescence for male child. This is when the father gives his son a slice of his land. The female will have the same right, however only after marriage – when her father gives the married couples a portion of his land as a gift. However, it is only the husband who has the ultimate right over the property and decision making ability regarding what to grow. If the husband dies, sometimes there is a risk of losing the land immediately either by her family or in-laws.

For the Nyamwanga community in Southern Tanzania, a similar scenario is experienced. Testimonies from the field indicate that parents would rather give land to their sons than daughters because of the fear that giving land to a woman means transfer of properties to a different family, as evidenced by one of the parents interviewed:

I have a daughter who will get married to someone from another clan. It that clan she will get children who are actually my grandchildren too. Now if I give part of my land to my daughter, it means t

he land ownership will be transferred to her children who are basically from another clan.

For the Iteso tribe who reside in Bugondo village in Uganda, cultural norms stipulate that only the male child is entitled to owning land; as part of his transition, a young male is presented land that they own and have control over and are expected to build a house and cultivate.  Having a house is a symbol that a young male has transitioned to adulthood. (Picture of a young man, his house and his land about here?)

Similarly, among the Karimojong pastoral community in Moroto District, North Eastern Uganda, land is passed from the fathers to their sons through the traditional inheritance process where a son that is ready for marriage is apportioned their own land to build a home, and graze animals. It is then assumed that his sisters will get their share from their future husband’s families, irrespective of whether the girl is interested in marriage or not. These assumptions sometimes leave girl children, and women with no fall back for land resources, especially when unmarried, separated or widowed.  This same principle applies to the ownership of livestock. Cattle, sheep and goats are highly valued in Karamoja, and they represent a key family asset and social status.  However, the boys are socialized to owning of the family livestock resources, while girls socialized as “product” for which the animals are exchanged through a very strongly held system of bride wealth.  There is a common tradition for boys in the area to wait upon their fathers (not mother and father) to “marry for them wives”, meaning extending to them land and animals for bride wealth and as capital for starting their families. The strong culture of male domination of lucrative resources has left Karimojong girls and women with very limited survival and productive resource opportunities.

For the young mothers, the process of accessing land is different.  Their parents don’t give them land as an inheritance.  Young mothers would need to negotiate land access through early marriages, through renting or through share cropping arrangements.  Even when they marry, the girls still require spousal consent to use the land for production activities, with varying levels of rights of the produce. The unmarried young women who have no financial capability to rent land to cultivate are left with no choice but migrate out of the rural dryland areas to pursue opportunity structures in the urban areas, often without much success, but perpetuating a cycle of struggle and poverty. However, the unmarried young men tend to be equally disadvantaged and less privileged than their married counterparts in the family.  Marriage plays a key role in access and ownership rights, which has implications for meaningful engagement of youth in agricultural productivity.

When young mothers have access to land, they can take advantage of opportunities in the drylands.  We have a story of Akiko, from Uganda, who despite failed marriage at a young age, was able to restart her life in the village. Akiko who hails from a poor household was unlucky to complete only her primary education.  She has to sustain her young family through subsistence farming.  She deals in cassava, finger millet and sesame. After an unsuccessful marriage

at the age of 23 years, she has gone back home to engage in farming an activity she learned at the tender age of 13.  Her family has given her access to a small piece of land that she is utilizing for farming.

Akiko is among the many poor young youth in Bugondo village in Eastern Uganda, who are passionate about agriculture and un-constrained land access would open new opportunities for her.

Would flexing the cultural and social norms transform land access for young mothers?

To mark the International Womens’ Day 2020, we call attention to the difficulties that young women in transition face in accessing land, within the family and in the land market.  In Uganda, the 2013 National Land policy calls for an overhaul of the succession Act and restoration of powers of land administration to traditional leaders, which ought to be sensitive to vulnerable groups rights.  But the strong cultural and gendered process of transitioning boys and girls mean that girls still continue to struggle, especially if they become mothers at an early age and don’t get married.  Equality in access to land should start at the family, with transformation of norms that govern land inheritance, with social and cultural support being offered to boys and girls transformed to be equal.  In Uganda, we came across a case of a young woman who has been supported by her father to access land. Ketty Abullo, a 24-year-old trained teacher, now fulltime farmer, tells a different story in her journey in agriculture. Her father, a farmer, who is also her role model, encouraged her to purs

ue a degree in Education as the colleges instill agricultural knowledge to the learners during the course. Despite him not supporting her financially to engage in farming, he gave her access to his land. Ketty now grows, groundnuts, watermelon, tomatoes and green grams on large scale. Through her farming initiatives, she has been able to fend for her younger siblings and has provided employment opportunities for youth in Bugondo.

Similar examples were found from North-central Ethiopia. Wokinesh is a 35 year old female adult and widow. Her aspirations were to work-hard, get rich and live a comfortable life as a farmer and trader. Her husband suddenly passed away when she was 23 years old and left her with 3 children. Her father and mother supported her and children after the death of her husband. In a community where widows may easily lose access/entitlement right to their land either by their family members or in laws, Workinesh’s father and elder brother didn’t take back the land. They instead protected her tenure, supported her financially and gave her inspirations saying that if males make it, she too, can make it.  In a community where women’s identity as farmer is also highly contested, Wokinesh has a different story to tell both as successful farmer and trader. She said the following;

“My mom and dad played a very important role in my life. They helped me pass those difficult times. My father tilled my land and protected my tenure instead of taking it back.  He believed in me and my aspirations (of becoming successful farmer and trader). They took care of my children and raised them very well. At the moment I have built two houses – one in this villages and another in town. I also grow different types of crops. My shop is also good. I now have everything I desire. ”

Such are examples of how cultural and attitudinal transformations within family members (where inheritance rights are apparently governed) are very essential for mothers and young girls. Such examples suggest that the seemingly insurmountable chasm that apparently governs access to and inheritance of land for young mothers can be transformed.  This is also crucial for attaining equality for boys and girls in transition, especially in the drylands.

This blog is published as part of the research on gender and youth supported by CGIAR Research Program on Grain Legumes and Dryland Cereals.